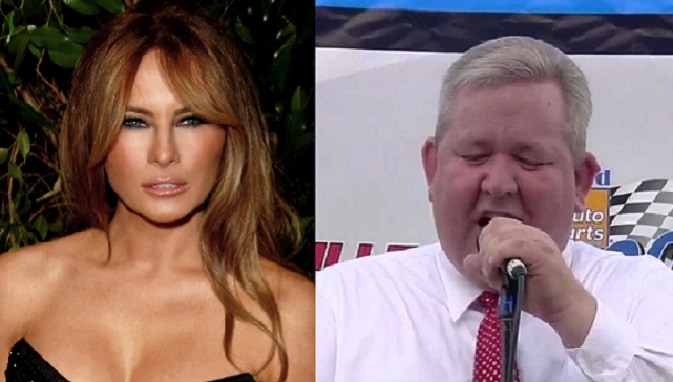 NASCAR Pastor: “We Should Thank God We Have A ‘Smokin’ Hot’ First Lady”

It’s not every day you get to perform a prayer in front of thousands, and close it out with “Boogity boogity boogity amen.” Joe Nelms took that opportunity in the last ever Xfinity Series race at Nashville Superspeedway on July 23, 2011. Nelms thanked everyone from the cars and engines to his “Smokin’ hot wife.” It’ll be five years on Saturday since the legendary prayer went viral, because it was arguably one of the funniest moments in NASCAR history.

Recently, the pastor came out of his 5-year retirement and was at it again. And he was more than back to his old ways. In an interview with Nesnfuel.com, Nelms took to preaching again, only this time he tackled politics. Whether it was because the presidential election is only months away or because he’s just a ladies man, Nelms also took the opportunity to thank the Lord “we’re probably going to finally have a smokin’ hot first lady after a long time.”

“I mean, don’t get me wrong, I think Nancy Reagan wasn’t too bad on the eyes either,” the comedic pastor argued in his style. “But, that was back in ’89 or something, and let me tell you, 26 years is a long time to be looking at some ugly-a*s women living in the White House. Luck would have it that this time we have the gorgeous Melany or whatever her name is, getting ready to do the job. And I’ll tell you something else – with a smokin’ hot bod like that, who cares where she’s from or what her name is.”

The controversial pastor also said that Americans have a lot to be grateful for, regardless of the fact that the past few years have been “less than kind to us.” “But you know, that’s the way of the world. You’re going to have good years and you’re going to have bad ones, but the main thing is to stay happy through it all. And that’s one of the reasons why I never understood gays – American women are so incredibly hot that all you have to do is go out into the street wherever you live and you’re guaranteed to fall in love within a couple of minutes,” Nelms praised his country.

“And coincidentally, that’s also why I’m a fan of Donald Trump,” he added. “I don’t know squat about politics, I’m just not into it. But I do love women. And my wife, the gorgeous woman that she is, knows about it and she’s okay with it. Because, just because you’re on a diet doesn’t mean you don’t get to look at the menu, right? And you can say whatever you want about Donald Trump, but the man has got an eye for women. Every single one he’s been with has been imported especially for him, but that’s okay. They were all smokin’ hot, and you can never have too many smokin’ hot genes in a country’s gene pool.”

“And that’s why every single American out there, regardless of his race, ethnicity, religion, or any other criteria, should wake up every morning and thank whatever God he believes in for the fact that we’re finally going to have a smokin’ hot first lady after half a century. Because even if we do end up at the brink of war because of Trump’s presidency, which is not a matter of if, but a matter of when, at least we’ll be safe in the knowledge that our First Lady is way hotter than the Russian or Chinese one. Take that, Putin!” the pastor opined.