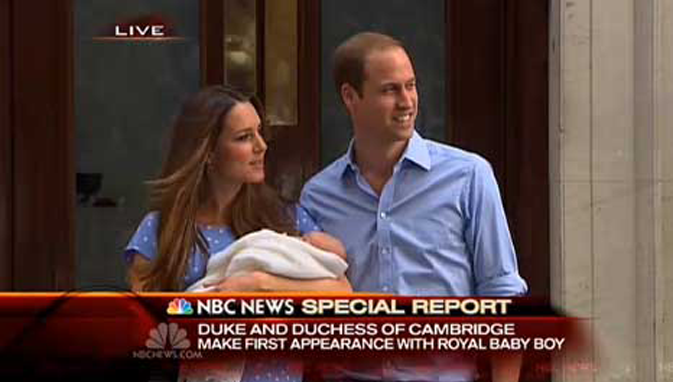 New Royal Prince Given Up For Adoption

LONDON — The Duke and Duchess of Cambridge have announced today the birth of an unnamed son.   Shortly after the announcement, however, the royal couple filed the paperwork to give the child up for adoption.

Widely considered to be the most extensively covered pregnancy in human history, the birth has received unprecedented media attention – even by British royal standards – attracting throngs of onlookers to Saint Mary’s Hospital.

“So nice of you all to come out,” said Prince William, the child’s father.  “But this just reinforces our decision.  It’s bad enough I was born into a life in which every single private moment is made public and scrutinized.  I mean, do you remember that goddamn wedding?” referring to his heavily publicized nuptials in 2011. “You people made that a zoo.”

“And if you think we are bringing a child into this,” he added, “then you are more daft than the idea of spending billions of pounds a year to support a figurehead royal family in economically difficult times.”

As she rested in the maternity ward, the Duchess explained that while the experience of giving birth was beautiful, this was not the right time to start a family.  “Like every little girl, I’ve dreamt of having my reproductive system the topic of discussion by strangers the world over, but the fact is we still not have decided if we want to have children. Besides, I married a prince to live a life of luxury – not change nappies and push a pram.”

Inside Buckingham Palace, Queen Elizabeth II  expressed mixed feelings about her grandson’s decision.  “On the one hand, I can see choosing not to bother with a child,” averred the Queen as she glared at her son, Prince Charles, and his wife, the divorcee Camilla Parker-Bowles.  “But William must understand that even though this crown carries as much authority as Burger King’s, for whatever reason people still care who wears it. To trifle with that is short-sighted and selfish.”

“He gets that from his mother,” she added.

A Mr. & Mrs. Basil Dudley of Warwickshire adopted the child.  Mr. Dudley – a descendant of the now-defunct House of Tudor, which had six monarchs wear the British crown in the 15th & 16th centuries – said the couple was thrilled with their new bundle of joy, and hopes he brings not only the family years of happiness, but also “back the throne that is rightfully ours.”