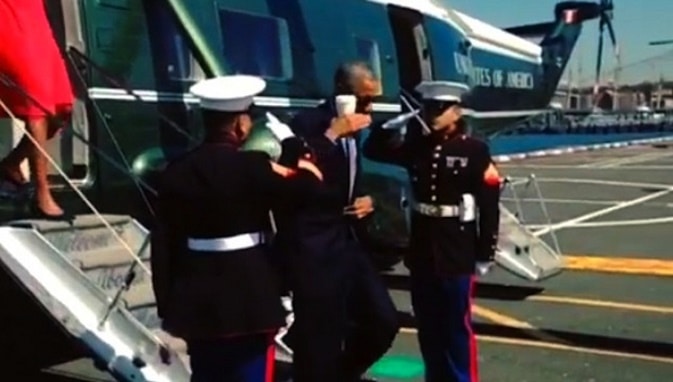 Following President Obama’s most recent gaffe involving our United States troupes’ a correlation has been found that links certain chemical compounds in coffee to change one perception of the American Patriotism.

On September 23rd President Obama was seen exiting his helicopter, Marine One, in route to a meeting with the UN, CBS News reports. Upon exiting President Obama was saluted by uniformed members of our military, as is customary, Obama returned the salute. The controversy surrounding this debacle is that he was holding a cup of coffee while doing so. Chas Henry, a WNEW National Security Correspondent told CBS News:

“Before, it was typical that a senior civilian would acknowledge the salute with a simple nod. That would probably have been the president’s better option in this case. A military person giving or returning a salute with a coffee cup, or anything else, in his or her hand would be perceived as being disrespectful,”

“While people in uniform give and return hand salutes as part of usual protocol, it wasn’t until the 1980s — when Ronald Reagan began returning salutes — that presidents took up the practice of acknowledging a salute in that way,”

While public outcry can be heard across social media and other news forums, researchers at The Institute of Kopi Luwak seem to have found a certain chemical in the coffee bean unknown to the public and manufactures before. The Institute reports that there are over 1,000 known chemical compounds found in the average coffee bean, and it comes as no surprise to find new chemicals and the effects of the compounds.

The chemical compound at this point has no formal name yet, and is being referred by researchers as BS271. The new finding has intrigued universities and medical professionals around the world. Sources tell us that the FDA has moved assets to Georgetown University, The University of Texas, and other research labs, to further education in this matter. We are told that two-thirds of the grants set aside for Ebola research have been redistributed to these such institutions as anti American semblance is a top priority for the U.S Government.

Simon Lapsen judge, a spokesman for the Institute of Kopi Luwak, released the following statement:

“Our recent findings were quite shocking to us. The discovery was made accidentally as experiments were being performed on individuals detained at the Guantanamo Bay prison complex. We had been researching the effects of the cognitive ability of inmates after three weeks of no sleep. In order to keep the subjects awake we had them on a constant IV drip injecting coffee directly into their blood stream, as well as using diodes connected to the subject’s chest and thighs to deliver a small electrical shock if they showed signs of fatigue.”

While the methods used to obtain these findings have upset some members of congress, the senate voted in favor of continuing these experiments and to secure government funding, by a vote of 7 in favor and 5 against. Senator Jerry Moran (R-Kan.), raised concerns and opposed the experiments, unfortunately for him, as well as the remaining 88 members of the Senate; the vote was held without them being present. According to a caddy at the Congressional Country Club, Sen. Moran, as well as three other senators were, present at the club at the time of the vote with Ingrid Newkirk and Wayne LaPierre. Newkirk is the CEO of ‘People For the Ethical Treatment of Animals’ and LaPierre is the CEO of ‘The National Rifle Association’ respectively. While we cannot confirm or deny the validity of the location of the Senators, we can confirm they were not present during the time of the vote.

Along with the statement from Lapsenjudge, the institute released its initial findings. Within the documentation we have received, it is clear that test subjects began to have a negative view of the American people and the country as a whole. Parts of the documentation read:

The report released Monday morning also stated their reason for human testing came after an outcry from members of PETA. The group staged a series of demonstrations after the initial tests were performed on rats, the institute not wanting to cause any more dispute, discontinued their use of lab rats and moved to prisoners instead. The decision to do so led to unheralded approval from the members of PETA.

Test subjects were reportedly held in specially built cells that had a Plexiglas façade, with researchers viewing each subject in a rounded building known as a panopticon. This gave them 24 hour access to each subject as well as allowed the test subjects to see the researchers in their luxury styled workspace designed by the architectural firm Perkins + Will and Hirsch Bedner Associates. The firm is best known for their work on the Mandarin Hotel and the first billion-dollar home.

As research continues on compound BS271, scientists believe that this could be the answer they are looking for as to why certain groups and individuals’ around the world hold a negative opinion of the U.S. Dr. Douglas Askew, a Georgetown researcher, believes that by isolating the compound we can better understand the actions of those who threaten the U.S government. According to Dr. Askew:

“…This correlation holds the key to understanding the actions of people such as Pablo Escobar, Osama Bin Laden, and members of ISIL. Escobar, as well as Bin Laden were known to consume more that 6 cups of coffee a day in order to keep up with their strenuous work schedules and daily demands of running their empires.”

Debate still continues about the validity of the statements, and members of the Islamic faith question these claims. Coffee consumption among members of the Islamic faith is not well documented as coffee is considered ‘makrooh’ due to the fact that it contains caffeine, an addictive substance. In Islamic law ‘makrooh’ are foods and substances, while not forbidden, are discouraged due to a number of different reasons.

As the studies’ continue, efforts have already begun as lawmakers and American citizens call for a coffee reform. According to an anonymous White House staffer, Secretary of State, John Kerry, has met with the President and plans to make this his number one priority. Our source tells us the Kerry intends to approach the U.N and NATO in the coming months and propose a coffee embargo. Along with this, we are told United States Intel has located multiple sites in the ISIL held territory identified as ‘coffee stashes’. Upon approval from NATO and the UN the President intends to launch airstrikes to destroy these caffeinated caches.

Since the Presidents coffee salute debacle, the Oval office has banned the consumption and brewing of coffee in any government owned building in the D.C area. Philip Morris International is already in the process of filming PSA’s to run during primetime and daytime TV spots, and have partnered with Clear Channel to run ads daily on the radio. Look for more legislation to appear in the coming months and years as more information is gathered regarding BS271. By cracking this code the Institute of Kopi Luwak has done a great service to the American public by bringing to light this potentially harmful compound. By stopping the sale and consumption of coffee, the way people view America can be changed significantly, and could finally lead to peace in the Middle East.