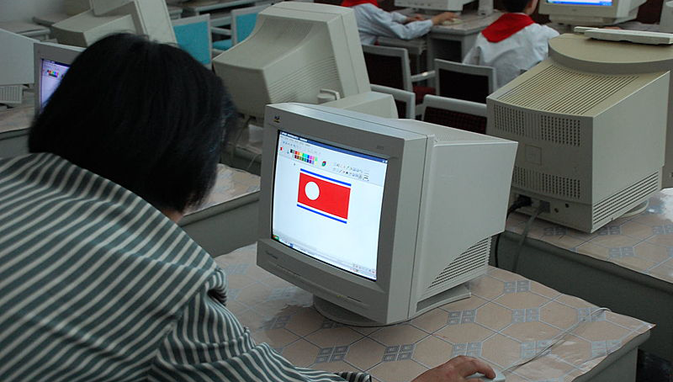 PYONGYANG, North Korea — According to the state-run North Korean Central News Agency, this weekend North Korean Supreme Leader Kim Jong Un toured the May 11 Factory in Pyongynag where the nation’s first generation of Andriod-style cell phones are being produced. The country’s top scientists nervously showed off their creation to the volatile leader in hopes of impressing him enough to return home to their families that evening.

The phone, called “Arirang” after a popular Korean folk song which in South Korea is about the desire to  see a loved one and in North Korea is about the desire to eat a complete meal, appears at first glance to work much like any other smartphone, complete with touch screen, camera, and Candy Crush. However, Arirang differs from other cell phones in the fact that the internet function only works when the phone has been plugged into one of dozens of cable modem outlets across the country, the touch screen is actually just a big mirror, and the camera is actually a lens which allows the central government to see whatever the user is doing at any given time.

The Candy Crushgame, however, is the same as elsewhere.

“He highly appreciated the creative ingenuity and patriotic enthusiasm with which the officials and employees of the factory laid a solid foundation for mass-producing hand phones . …  he said that a hand phone is convenient for its user when that part of the phone is sensitive. He noted that these hand phones will be very convenient for their users as their camera function has high pixels.”

Skeptical international observers noted that Kim Jong Un visited the May 11 Factory two years ago with his father, Kim Jung Il, to tour a flat-screen LCD assembly line. That the factory had been retrofitted to produce the Arirang instead in so short a time was attributed not to the widely-held suspicion that the electronics were actually made in China and secretly shipped to the factory to give Kim Jong Un a photo op, but because North Koreans are a highly nomadic people who enjoy uprooting an entire manufacturing industry every so often on a whim.

Before exiting the factory, Kim Jong Un took a moment to praise the Arirang engineers. “These patriotic patriots have shown the West that the Democratic People’s Republic of Korea can build a shiny gadget as well as anyone in the world,” he said. He then asked one of the engineers if Arirang could access Facebook. When the engineer answered in the affirmative, he was shot on sight.