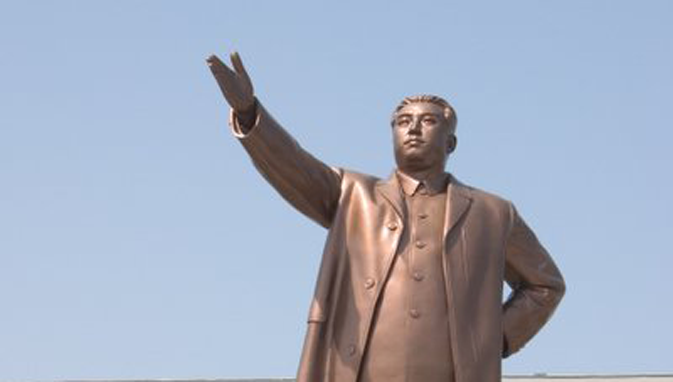 SEOUL — In a stunning move, the Democratic People’s Republic of Korea (DPRK) has finally issued a declaration of war—not on South Korea, Japan or the United States, as some experts believed was inevitable, but rather on the clouds and sky that hang above our heads.

Saying that the time has come to “liberate the eyes and minds of the North Korean people from the sky guardians,” North Korean dictator Kim Jong-un said today that his nation can “no longer wait as the upper atmosphere continues its spread across his country unabated.”

“We must remain vigilant, and we will be victorious,” Kim bellowed to thunderous applause in the capital city of Pyongyang. “The threat that the sky poses to us is greater than any other in the world.”

Claiming that former Supreme Leaders Kim Il-Sung and Kim Jong-Il are being held hostage by ‘sky-men’ in the clouds above, and that the sky has done nothing to stifle the passage and flight paths of American bombers and aircraft, North Korea’s military immediately began mobilizing troops north in the direction of its border with China and away from the DMZ separating the two Koreas.

North Korea’s rhetoric over the past few days has accompanied the positioning of missiles in firing arrangements, and the plans for yet another missile test. North Korea has indeed utilized one missile to try and combat the sky directly, firing it straight up into the clouds.

When the very same missile crash-landed inside of North Korea, however, the Koreans declared that the clouds have “the most sophisticated missile defense system in the world.”

One operation mounted against the sky outside of the city of Wonsan left fifteen hundred DPRK soldiers either wounded or dead, in what has been called a Pyrrhic victory for Korean forces. State-run television reported  a glorious victory, however.

“Maybe they’re trying to show us they don’t fear death? Or maybe they’re planning something really insidious?” said US Forces in Korea commander General James Thurman. “This is either one of the strangest distraction tactics in military history, or they really do believe they’re fighting the clouds.”

Images from the Battle of Wonsan showed soldiers firing wildly into the air with rifles and Katyusha rockets, causing heavy friendly-fire casualties among their own comrades.

“We are monitoring the situation closely,” said White House Press Secretary Jay Carney in an emergency statement. “But for now, we’re chalking this one up as just a bunch of idiots firing rifles into the air.”