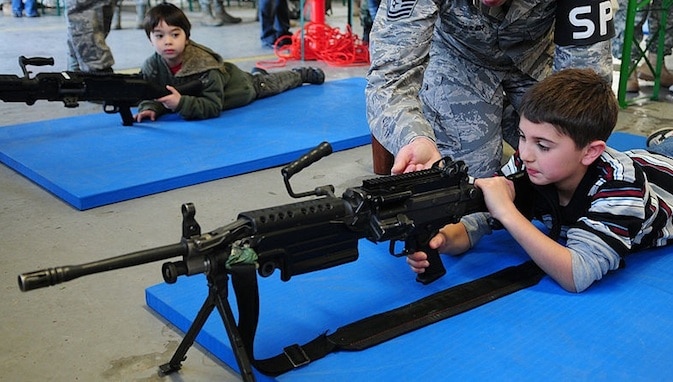 WHITE HILLS, Ariz.—Alarm over last week’s accidental shooting death of a firing-range instructor by a 9-year-old girl with an Uzi submachine gun has gripped the nation. Fearing blowback in the form of new gun control measures, the National Rifle Association issued a statement warning younger siblings to take up arms before their “big sisters and brothers can do more damage.”

“The only way to stop a 9-year-old with an Uzi is an 8-year-old with a bazooka,” wrote Wayne LaPierre, executive vice president of the NRA and a youngest child.

LaPierre blamed violent video games and movies for the volatile behavior of older siblings, who often use their age—or unfettered access to automatic machine guns—as weapons against younger family members.

“For every older brother or sister who refused to let his younger sibling take a turn shooting the gun in ‘Duck Hunt,’ I have this to say,” continued LaPierre. “We’ve got you in our sights. Make one wrong move, and we’ll take you out.”

The owner of the firing range where the 9-year-old from New Jersey lost control of the gun’s recoil said of his fallen instructor, “We lost a friend—basically we lost a brother.”

Owner Sam Scarmardo also noted, “It is pretty standard in the industry to let children shoot on the range,” though he remains open to making some changes to see that such a tragedy does not reoccur.

Last Stop already goes beyond the federal government’s “onerous” gun regulations by restricting children younger than 8 years of age from firing heavy weapons on the range. Federal law’s prohibition against the possession of a firearm by minors does not apply to shooting ranges, and Arizona lacks any age limit for firing guns.

“If it would help to station a younger family member on a watch tower with a bazooka ready to head off any missteps by their older sibling, we’ll do it,” said Scarmardo. “Frankly, I don’t see any other way to prevent these mishaps.”

The NRA’s statement makes it clear that the Uzi, a notoriously difficult gun to handle, is not to blame. “It’s important to remember that guns don’t kill people. Ponytailed 9-year-olds on a family vacation kill people.”

For now, LaPierre urged families to “play nice, take turns, and never let down your guard.”