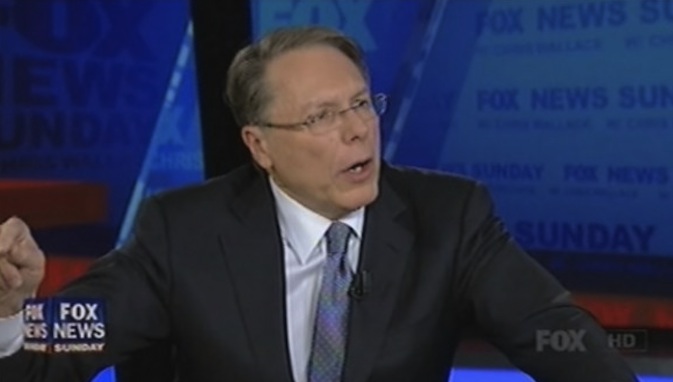 WASHINGTON — In what has become the latest such tragedy, at least 12 people were killed Monday in a mass shooting that occurred in a D.C. naval office building. The suspect, a former Navy reservist reportedly named Aaron Alexis, was himself shot and killed by law enforcement officials. While Alexis’s motives remain unclear, at least one lobbying group has already decided to apportion blame for the attack. At a press conference Monday night, National Rifle Association executive Vice President Wayne LaPierre took aim at the entertainment industry.

“While our hearts and prayers go out to the victims and their families, we feel it would be remiss not to remind the American people of what it is that makes these catastrophes so commonplace,” said LaPierre. “The lurking variable that leads to the deaths of 87 Americans every day.”

“I am talking, of course, about Grand Theft Auto V.”

According to the LaPierre, Grand Theft Auto V, released Tuesday, and other violent video games were the root cause of violence in American society. LaPierre spoke for 20 minutes about the popular game franchise’s corrosive effects, noting that since the series was first released in 1997, there have been 40 mass shootings in the United States.

“The evidence against Grand Theft Auto is not to be disputed. Clearly, excitement over the imminent release of this game led Mr. Alexis to commit celebratory murders,” said LaPierre. “Either that, or [Alexis] was going on a ‘practice run’ in anticipation of playing this degraded piece of garbage.”

“To point fingers at anything other than Grand Theft Auto V  for this tragedy is morally irresponsible,” LaPierre asserted.

The popular video game series has been a target of controversy and criticism since its inception, due to its graphic portrayal of the criminal underworld and violent gameplay, including the ability to murder and carjack civilians and police at will. According to Guinness World Records, it is the most controversial video game series of all-time.

“Were it not for Grand Theft Auto V—released mere hours after this heinous act—12 people would still be alive,” asserted LaPierre. “What will it take for the American people to stand up and say, ‘Enough is enough’? When will the heartless criminals at Rockstar Games be made to answer for these outrages?”

“If videogames were not so widespread and easy to get your hands on, this horrible act might never have happened,” LaPierre said. “It’s high time Congress and our president backed sensible video game regulation. Anybody that wants to purchase a copy of Grand Theft Auto V must undergo a background check, a psychological evaluation, and a five-day waiting period. Most importantly, all copies of the game must be kept under lock and key when not in use.”

“Many adults leave their video games and consoles lying out in the open where children can find them,” said NRA member Justin Morrow of Harrisburg, Mississippi. “Why, just the other day, I walked into my friend’s living room and his five-year-old was trying to set up the Xbox 360. I couldn’t believe it. Given how many unaccounted-for video games there are lying around, it’s a wonder there aren’t more horrible acts of violence.”

“Thank God the Supreme Court overturned D.C.’s handgun ban in 2008,” Morrow added, “otherwise it would have been even worse.”