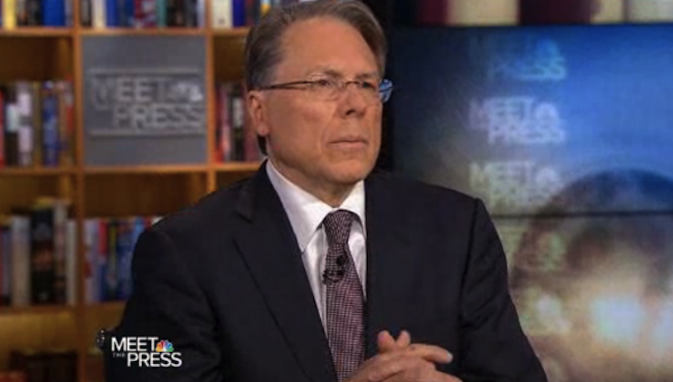 NRA Demands Obama Allow Corporations to Own and Carry Guns

WASHINGTON — The Obama administration announced last week that it will close a loophole which previously allowed corporations and trusts to purchase firearms without undergoing a background check. The NRA immediately opposed the new rule. “Requiring background checks for corporations and trusts does not keep firearms out of the hands of criminals,” said NRA spokeman Sndrew Arulanandam. “American corporations have the God-given right to walk down the street as fully and anonymously armed as any private citizen.”

NRA CEO and Executive Vice President Wayne LaPierre had harsh words for the new rulings. “Forcing a law-abiding private trust or corporation to jump through hoop after hoop like this in order to practice their Second Amendment Right to bare arms is, quite frankly, un-American,” he said. “A background check is the first step towards a national registry of gun owners. After that it’s just a small step to rounding up every gun owning corporation in America and placing them in internment camps. Frankly, this stinks of something Hitler would do.”

Vice President Joe Biden unveiled the new policy during the swearing-in ceremony for B. Todd Jones, the new director of the Bureau of Alcohol, Tobacco, Firearms and Explosives. He explained how a loophole in the current policy allows felons, people convicted of domestic violence, and other individuals banned from having guns to evade required background checks by registering a gun to a trust or corporation, and added that the ATF reported that it received more than 39,000 requests last year for transfers of restricted firearms to trusts or corporations.

Gun control advocates dismissed LaPierre’s concerns as overly-dramatic. “What’s the big deal?” asked Dan Gross, President of the Brady Campaign to Prevent Gun Violence. “If a corporation has something in its background it doesn’t want discovered, it can go buy a gun anonymously at a gun show like everybody else.”