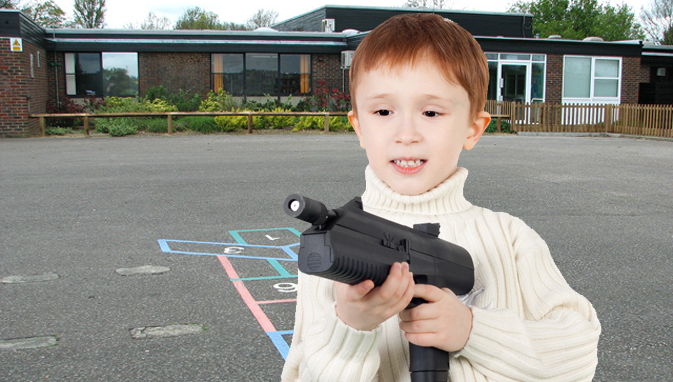 “Most schools don’t even allow students to have cell phones in class. There’s no way they’re going to let them carry guns,” declared Erquiaga.
0
Shares
0
0
0
0

A 13-year-old student at Sparks Middle School opened fire on the school’s campus just before the starting bell Monday, wounding two boys and killing a teacher, police said. The boy then shot himself dead with the semi-automatic handgun, which belonged to his parents.

Asa Hutchinson, director of the NRA’s National School Shield task force, told MSNBC’s Chris Jansing that the shooting “could have be averted had certain students been empowered to stop it.”

“Anybody that’s been to school knows that teachers can’t be in all places all at all times,” said Hutchinson. “There were reportedly 20 or 30 students that witnessed the shooting. Once the teacher was killed, they were all powerless to stop it.”

Hutchinson was referring to Michael Landsberry, the 45-year-old math teacher and former Marine who was shot and killed when he told the student to put the gun down.

“This is another case where a gun in the hands of the right person could have prevented another tragedy. Even a former Marine can’t stop a child when the child is brandishing a gun,” stated Hutchinson.

Hutchinson said The National School Shield, which the NRA created in response to last December’s mass school shooting in Newtown, Conn., would “begin exploring options that would allow certain students to carry firearms in our nation’s schools.”

“What we need is firearm passes for our best students—class presidents and honor roll-type kids that can stand up for their school and their community by providing backup to teachers.”

Federal law prohibits the possession of a handgun or handgun ammunition by any person under the age of 18, but Hutchinson pointed out that there is no minimum age for long gun possession. “We’re not talking about pistols in backpacks, of course, but many students already have hunting rifles and other arms at home that could be placed around the school in secure areas, much like fire extinguishers.”

Nevada Superintendent of Public Instruction Dale Erquiaga joined Hutchinson and Jansing on air, and said that although many school boards have weighed the option of arming teachers and administrators, the state would not support the NRA’s plan to arm students.

“Most schools don’t even allow students to have cell phones in class. There’s no way they’re going to let them carry guns,” declared Erquiaga.

Marco Rubio Proud to Have Stopped Dems From Gutting Obamacare

This Week in Entertainment: Kim & Kanye, ‘Fifth’ Flops and ‘Homeland’ Introduces the Concept of a ‘Twist’

UUS
Read More
“Girls and women today take sex lightly, knowing that there’s a safety net in the form of legal abortion”
UUS
Read More
ST. LOUIS — Looking to take advantage of growing environmentalist movements, chemical giant Monsanto has announced that the…
VVideo
Read More
[via i09.com]
UUS
Read More
TUSCON, Ariz. — Two years after being shot in the head during an appearance in front of an…
WWorld
Read More
Putin told Times reporters that he was excited by the opportunity to write about his opinions on Syria, but even more excited by how good this experience will look on his resume.
WWorld
Read More
Carney cautioned Rouhani to “cool it,” or else “it’ll be another thirty years before he speaks with an American president.”

Marco Rubio Proud to Have Stopped Dems From Gutting Obamacare

When told that he had, in fact, championed shutting down the government unless Obamacare was defunded, Rubio adamantly shook his...