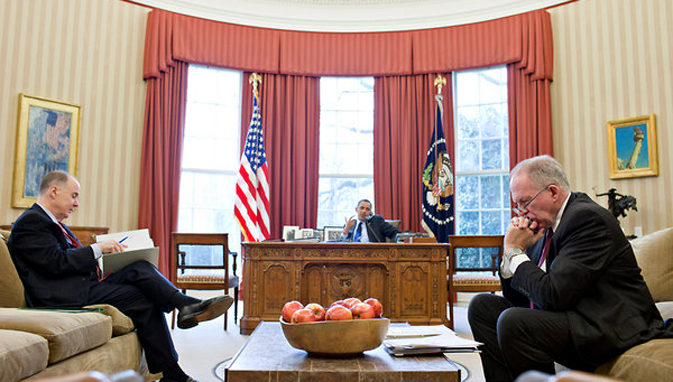 SPENCER, W.VA. — President Barack Obama left this small West Virginia town in a state of confusion on Friday when a speech he gave at the local community center petered out into awkward, cough-filled silence. Obama, who came to Spencer for a town-hall forum on his ideas for gun control, had first been greeted with polite if rather forced applause, but after his suggestion that half a million dollars could buy an audience in the Oval Office, things got chilly.

“Now I know a lot of you don’t agree with assault-weapon bans or extended waiting periods,” Obama said, his white sleeves rolled up to his elbows. “But I want to hear from you, too. In fact, as part of a plan to reduce our federal deficit, I would be willing to sit down with each and every one of you – each and every willing American – for half an hour, at a cost of only $500,000.”

The president grinned expectantly, as if he thought he had reached a large applause line, but the crowd of several hundred only looked at each other and, in some cases, slowly put their hands into the pockets of their jeans. His offer of meeting with everyday citizens at a cost of “only” $278 a second still on the table, Obama tried to clarify.

“Well obviously not every American,” he said, waving a hand to indicate that a child would eliminate such a possibility. “There are over 300 million of you and I have a country to run. But I’m confident I can hear from many, many of you, and, for a half a ’mill, these famous ears are all yours.”

The eyes of Democratic boosters in the crowd were wide. Dry coughs began to pepper the community center’s stillness. Like most good speakers, Obama sensed he was losing the crowd, and he quickly attempted to close what he saw as a gap in understanding.

“Or, are you worried about me selling influence?” the president asked, starting to sweat and anxiously scanning the audience for a friendly face. “Because I’ll take $500,000 from anyone – regardless of party affiliation or whatever. And it’s not like the money goes to me! God, no. Nor to the White House or the DNC. Your dollars will go precisely to where they are needed: the federal government.”

Staffers and Secret Service personnel rushed Obama from the scene.

Though greeted with hostility by the citizens of Spencer, Obama’s “500K Good Day” plan is not without economic merit. If 10% of the U.S. population accepted the offer, the proposal would raise $15 trillion.