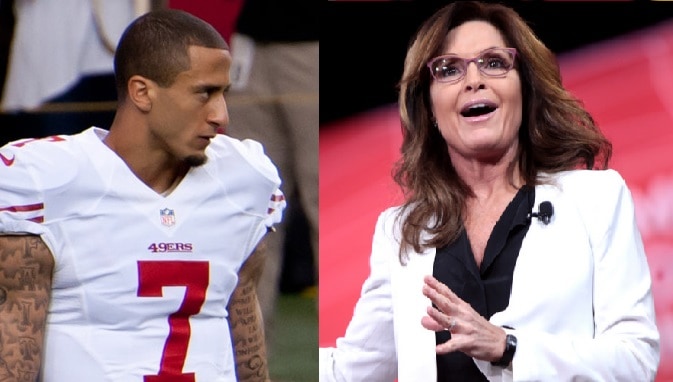 Palin: “If The Little Baboomba Won’t Respect Us, We Should Deport Him Back To His Real Home”

San Francisco 49ers quarterback Colin Kaepernick disrespected all of America when he refused to stand for the national anthem. Kaepernick, who has fallen hard and fast from his days as an elite quarterback, refused to stand for the national anthem against the Green Bay Packers. He was clearly motivated by some sense of a misguided understanding of oppression. The dual-threat quarterback stated, “I am not going to stand up and show pride in a flag for a country that oppresses black people and people of color. To me, this is bigger than football and it would be selfish on my part to look the other way. There are bodies in the street and people getting paid leave and getting away with murder.”

As always, the quarterback’s shameful gesture didn’t go unnoticed, and the first one to react on this occasion was former half-term Alaska governor, Sarah Palin. As was to be expected, the sharp-tongued Republican with often-questionable rhetoric let go of the brakes and went full beast-mode in a Facebook post addressing the issue. “In all my years of doing politics and all my years of being proud to call myself an American, I have never seen such a public display of disrespect and flat out hatred towards one’s country,” Palin started off. “What makes this tragedy even more shameful is that it involves a celebrated and well-known professional athlete. Those men are supposed to be the best this country has to offer, not to mention that we’re talking here about football, which is a traditional American sport. I’m shocked.”

“That young man made me very angry, and I’m sure millions of Americans throughout the country feel the same way, let alone his own teammates,” Palin added. “I am going to see to it that he gets fired from the team and that his career ends in the most shameful way. To be a professional athlete is an honor bestowed only upon a select few. In ancient Greece, athletes who competed in the Olympics were celebrated as national heroes. And in America, we’ve just witnessed an athlete spit on the country and sport that have given him so much,” the post read.

Asked to comment on her flammable words, Palin told The Huffington Post that “if he won’t respect the country that has enabled him to be rich, famous and widely praised for his athleticism, maybe we ought to deport that little baboomba back to his real home.” “Because, he clearly feels like he’s somehow not living a good enough life here, so maybe that’s the problem. At the end of the day, thank God we have plenty of other eager and willing young men who can fill his shoes and then outgrow them. There are plenty of other young, hungry, black Americans who would kill to be where he is. Or as of recently, where he was,” Palin said.

“I mean, I must admit I’ve never heard the African national anthem, maybe it doesn’t say anything about bodies on the street and people getting away with murder…oh wait – neither does ours. Oh my, it looks like someone is delusional here,” Palin exaggerated to make a point. “Bottom line, that sorry excuse for a quarterback is history because in order to play American football, you first have to be American, and not standing up when the national anthem is played means you’re just a fading loser who can’t keep up with the competition, and are using controversy and scandals to attract attention. I have nothing more to say to him, except, good luck in Africa, little baboomba. You’ll probably have to stand up for the national anthem there – you’ll have no choice because of all the drug and arms dealers in the audience,” the former governor of Alaska concluded.