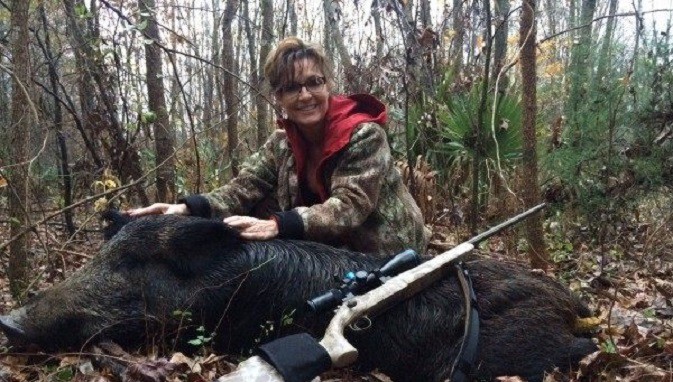 Palin Poses With Dead Hog: “I Picked A Black One So Nobody Could Accuse Me Of Being Racist”

Former Alaska Gov. Sarah Palin posed with a wild hog and posted the photograph to Facebook over the weekend to encourage Wisconsin voters to turnout for GOP front-runner Donald Trump. In a Sunday Facebook posting, Palin can be seen caressing the dead hog. A rifle in the photograph suggests that the animal had been recently killed. “Faith of America is in you to take us forward on Tuesday,” she wrote to Wisconsin voters.

However, when asked to comment on the dead hog that can be seen “posing” next to her on the aforementioned photo, she had only one thing to say, “Well, nobody can accuse me of being racist now, can they?” The former half-term governor of Alaska has come under fire recently (even though she constantly finds a way to be talked about) for comments regarding “the restoration of slavery” and for supporting the statements of Laurence Rossignol, France’s minister for family, children and women’s rights who recently hurled a racist epithet against African-Americans.

“The fact to the matter is that hunting has always gone hand in hand with the constitutional right of Americans to bear arms. We are a country that takes great pride in our freedom, and one of the prevailing symbols of that freedom is the ability to own weapons. Now, hunting is the next best thing and I am not going to apologize for exercising my constitutional right,” Palin said. “Plus, the hog was kinda snooping around my poppy field, so I had to take care of it. And then I thought, ‘Well, why don’t I capture this moment?’ It all felt very natural.”

She also added, “And the Democrats, as well as anyone who calls me a racist can bite me, because I intentionally picked a black hog to pose next to. There were actually several hogs threatening to destroy my crops, and I knew what the reactions would be like, so I wanted to pose next to a black one precisely because I want people to know I have no problem being around black meat, regardless of its size, shape or form. Now, if that’s not a healthy, anti-racist attitude toward things, I don’t know what is.”