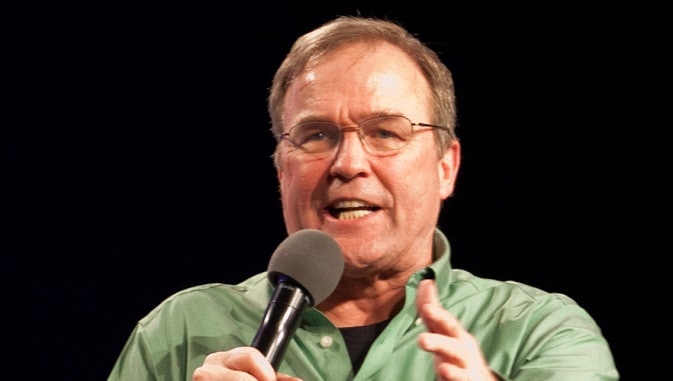 Recently, Ted Cruz’s presidential campaign proudly announced the endorsement of Mike Bickle, the head of the controversial International House of Prayer and an extremist pastor who believes, among other things, that Oprah Winfrey is a forerunner to the Antichrist. Among Bickle’s more radical views is his prophecy that as the End Times approach, all Jews will be given a chance to accept Jesus, warning that if they do not accept “the grace” of Christ, God will then “raise up a hunter” who will kill two-thirds of them “and the most famous hunter in recent history is a man named Adolf Hitler.”

“Now, don’t be looking at me with those judgy eyes, I know full well what I’ve just said. Believe it or not, despite the fact that history remembers Adolf Hitler as a mass murderer and one of the greatest criminals that ever walked the face of the Earth, I would argue that his mission was still a noble one. Look at how many Jews he got rid of, and I don’t care what anyone says, he was right to do it. Although, I agree that he could have used different, let’s say, more discreet and subtle methods, but the man was efficient and didn’t care for appearances. And most importantly, what he did was not of his own free will; his actions were instructed by God,” Bickle raved.

The controversial pastor continued, saying, “In my book, and I’m sure, in the book of millions of other Christians as well, Hitler was a hunter, a warrior of God. That’s why I have chosen to stand behind Ted Cruz, because he is the only politician today who’s not afraid to speak his mind and offer unbeatable arguments. I would remind everyone that our country is going through difficult times right now, with all the sin and fornication that we as a nation were somehow tricked by the Devil into thinking was acceptable. Ted Cruz is immune to the Devil’s charms and stands tall and proud, as a real Christian, Jew-hating, white politician should. He has promised me that he will hunt down every last one of the Jews in this great country of ours, that is, if they previously refuse to accept the grace of our Lord, Jesus Christ.”

“And make no mistake, Jews are evil. Take Einstein, for example. He always went on about how he was an agnostic, but everybody knows he was full of cr*p. He was a Jew and there’s no use lying about it. He was also one of the most brilliant minds in history. And what did he choose to do with his life? He decided it would be fun to give mankind all these little clues about the great knowledge he possessed, but kept the majority of it hidden. He never admitted to what he really knew, and fed us information with a teaspoon. Unless he was an alien sent to Earth to study humans, which I believe is a plausible theory, I don’t really think that sounds like a person that has altruistic motives. And that goes for all Jews,” the pastor concluded.