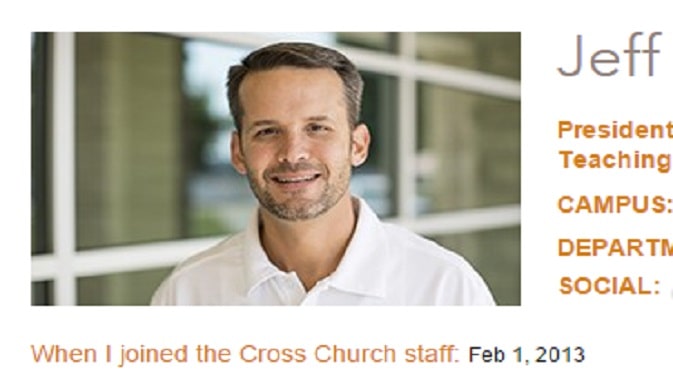 Arkansas pastor Jeff Crawford argued over the weekend that a woman has no “right over her own body” because it is owned by God. During a Sunday sermon at Crosschurch about the dangers of pornography, Crawford likened the issue to abortion rights. “We have bought into what I want to call this morning theological dualism,” the pastor opined. “This is the idea that you can separate what goes on with our bodies with what goes on with our soul and spirit.”

According to Crawford, the Bible contradicted the belief that people had a right to control their own bodies. “This idea that you hear about in the abortion debate that it’s a woman’s right to choose and she has the right over her own body, no, that’s not true!” he exclaimed. “What that means is you’re your arms and legs and your head, it all belongs to God.”

The pastor continued to blast pornography as the “single most important reason for the uprising of feminism in the United States” and claimed that, despite the fact that “women appear to be subdued in pornographic films, they are actually the ones in control.”

“The problem with pornography nowadays is that it has managed to twist the viewers’ perception of their own flesh,” he opined. “You have today women who also watch pornography, and when they see what’s going on in the majority of films, they realize that they have a God-given tool that allows them to control men. That’s when things change and that’s when female empowerment truly begins,” pastor Crawford said.

He added: “When women act in pornographic films, they somehow get the idea in their head that they can decide for themselves what they want to do with their bodies, that somehow they have control over their bodies. The Bible clearly states that nothing human actually belongs to humans, and that’s why, among many other reasons, pornography is sinful. It falsely empowers women and thus undermines men’s authority.

Pornography is meant to turn tradition around, and it’s the main reason why divorce and abortion rates are through the roof nowadays, because women think they know better when in fact, they couldn’t be more clueless.”