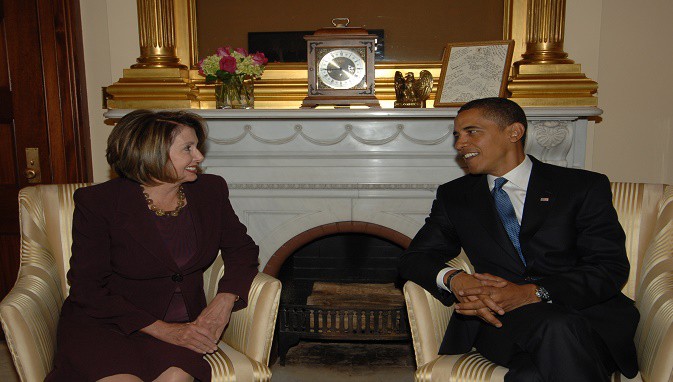 “House Minority Leader Nancy Pelosi (D-California) released a statement shortly after Israeli Prime Minister Benjamin Netanyahu delivered his speech before Congress on Tuesday. Pelosi declared in her statement she was brought to “near tears” because of how deeply the speech had “saddened” her. She said the Israeli leader’s words were “emotionally charged” and made her reconsider everything that history has taught her.

“In the speech, Netanyahu expressed staunch opposition to the still-unannounced deal the US is helping to broker with Iran that aims to draw back the Tehran’s nuclear ambitions. Netanyahu argued the “bad deal” would lead to Iran getting a nuclear weapon, which he said would threaten the existence of Israel.

“Netanyahu said: “If Iran threatens to walk away from the table – and this often happens in a Persian bazaar – call their bluff. They’ll be back, because they need the deal a lot more than you do. And by maintaining pressure on Iran and on those who do business with Iran, you have the power to make them need it even more.”

Initially, “Pelosi stressed that she agreed with Netanyahu on the importance of preventing Iran from obtaining a nuclear bomb. Her statement continued: “Today, Prime Minister Netanyahu reiterated something we all agree upon: a nuclear armed Iran is unacceptable to both our countries. We have all said that a bad deal is worse than no deal, and stopping the spread of nuclear weapons is the bedrock of our foreign policy and national security.”

However, speaking exclusively to Newslo, Pelosi admitted that her emotions were, in fact, “severely off-balance during the Israeli Prime Minister’s address.

“I’ve been a politician for a long time now and I’ve learned quite a few tricks of the trade, but I’ve never fully mastered keeping my heart in-check during certain times. To be honest, while listening to Netanyahu, I felt both inspired and devastated. It was truly moving to see that the Israeli have not yet given up hope of survival, not even after so many centuries of persecution and deaths. However, I also felt really bad having seen that they actually believe they will make it through. Unfortunately for them, Obama has already set the pieces in motion that will allow Iran to get what it wants, and when that happens…well, you get the picture. I both admire and feel incredibly sorry for Israel. Hopefully, they’ll get to enjoy what little time they have left,” said Pelosi, with a sad look on her face.