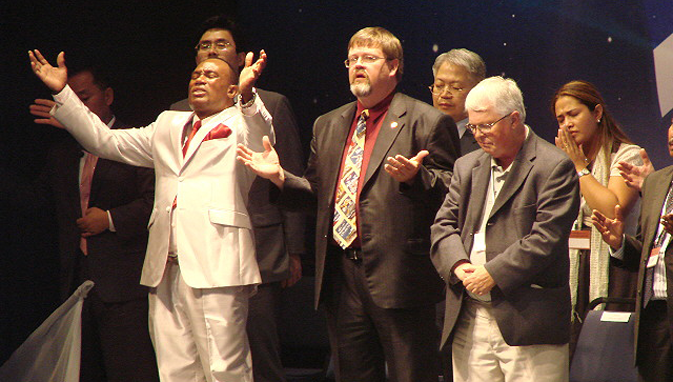 Pentecostal Pastors Warn of HIV’s Spread through Speaking in Tongues

LONDON — Pentecostalism is spreading throughout the United Kingdom faster than any other Christian denomination, but with that growth has come an HIV threat that has many in the church talking.

Pastor Moses Jeffreys claims he has “reason to believe that the all too casual gifting of tongues between certain young members of the congregation has served to communicate this pestilence.”

“The laying on of hands or rubbing oil on the sick might just exacerbate the problematic fraternizing,” remarked Jeffreys, referring to commonly used spiritual gifts of healing. “And HIV medicine is futile when only God can heal absolutely.”

As of 2011, one in every 650 people in the U.K. was estimated to be living with HIV. A quarter of these 96,000 people were thought to be unaware of their infection.

In response,the Medical Research Council has established a campaign to urge the country’s religious leaders to disabuse their church members of nonsensical notions about sexually transmitted infections. The program has already seen signs of success.

According to a survey conducted by the Children’s HIV Association, a number of doctors and health professionals across England have reported dozens of cases in which pastors pressured young church members to stop taking their anti-retroviral medication and instead rely on faith in God and bottles of blessed water as cures.

Pediatrician Toni Tan warned against following such “medical mumbo jumbo” when it comes to disavowing potentially life-saving treatments. “It’s very wrong for faith leaders to actively encourage their congregations to stop taking their medication…it will lead to their deaths,” cautioned Tan.

Reached for an interview, one of the hospitalized HIV patients documented in the association’s report emitted an unintelligible series of vocalizations. Pastor Jeffreys was encouraged by the outward signs of his parishioner’s recovery, noting that “speaking in tongues is thought to indicate baptism with the Holy Spirit.”

Dr. Tan offered a slightly different interpretation. “Death rattle,” he said, shaking his head. “God only knows how many more will suffer a similar fate.”