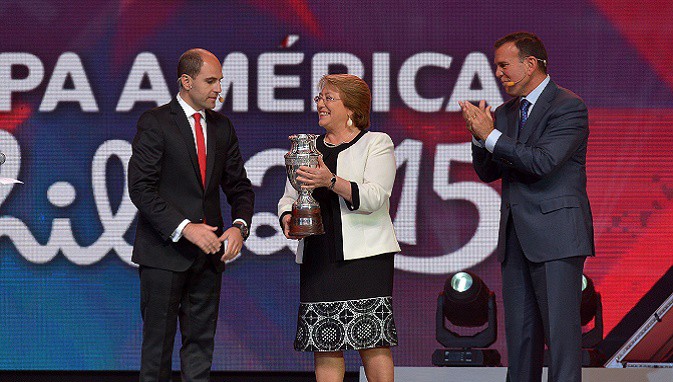 Players to watch in Copa America 2015

Copa America this year will have plenty of talent on show. That’s true even if Luis Suarez is banned, and commentators have somewhat justifiably claimed this is the tournament where nothing makes sense. Here are our players to watch once the tournament starts later this week in Chile.

He’s been addressed by teachers protesting for working rights which should give you an idea of the Arsenal ace’s popularity. The attacker topped an excellent first season in Britain with a superb final goal in the FA Cup against Aston Villa, and he’s going into the tournament in good form. Having made 16 goals with 8 assists in this term’s Premier League, he’ll be the major goal threat for Chile. The team needs him to fire in order to improve on their disappointing exit in the 2011 quarter final.

He made it to the Champions League finals after a stellar season with Italian champions Juventus. Now with Chile he will be playing a critical role in the park center. If Sanchez delivers their goals, Vidal’s job will be winning back the ball and feeding the forward. Fortunately for the hosts of the tournament, 28 year old Vidal has been doing exactly that, and doing it superbly, for Juventus all season.

Since Chile conceded nine in their last six, Barcelona keeper Bravo will probably be called on frequently during the Copa America. Fortunately the 32 year old captain, with a record 89 caps, performed impressively during the 2014 World Cup.

Mexico’s legendary Rafael Marquez might be 36 years old, but with his vast experience — 124 international appearances, well over 500 outings on behalf of clubs from Barcelona to Monaco to Verona — the player is going to be key, and a major draw for fans with Copa America tickets (which, by the way, can still be found here). The central defender brought his country a round of 16 exit to Holland in the World Cup, after a group stage 0-0 against Brazil and wins against Cameroon and Croatia.

Having scored a contender for Goal of the Season during his first Premier League run with West Ham, Enner Valencia will be providing Ecuador with some pace on the break plus a great shot from out of the box. He may have made a fairly disappointing four goals with three assists in 32 appearances but the 25 year old forward has potential to cause problems for defenses this summer.

Swansea’s winger Jefferson Montero showed off his superb flank play this season at Liberty Stadium, delivering seven assists to Garry Monk#s side as a regular. Valencia will be one of several Ecuadorian attackers who hope to profit from Montero’s down-the-left raiding runs.

Though he may have won the Golden Ball during the 2014 World Cup, that wasn’t much consolation — again he and his team failed to bring back a major trophy. The Barcelona will be desperate to put some major international silverware next to his steadily growing club metal collection, and given Argentina’s incredible attacking talent this might be their year.

How Much of Your Property Taxes Are Tax Deductible?

How To Defend Against Getting Sued As A Small Business Owner