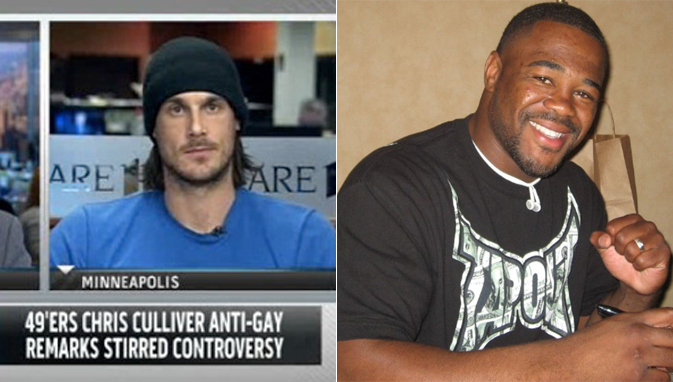 Professional Athletes Come Out in Support of Gay Rights, But Definitely Not Gay

UNITED STATES OF AMERICA — Recently UFC star Rashad Evans became the latest male athlete to voice the point of view that gay, lesbian, bisexual and transgender Americans deserve equal rights, and also that he is none of those things. The straight-as-an-arrow Evans released a statement saying that at first he “didn’t fully understand the issues around gay people.” And how could he? He’s so very straight.

“I’m a UFC fighter, a macho-type sport,” Evans said. “I am a heterosexual guy in a tough macho sport, which is exactly the reason I feel a duty to say I support gay marriage and gay rights.”

Evans added: “I have nothing to gain personally from supporting this issue, and that’s the point.”

The NBA, MLB, NFL and NHL have all weighed or initiated gay-friendly education efforts with their members. None of the 102 teams in those organizations can claim an openly gay player among the thousands on their collective rosters. Several franchises have produced “It Gets Better” videos, though not one of the participants can admit to knowing from personal experience that it does.

Sources say, however, that use of the word “faggot” during team practices has declined 12%.

“Any professional athlete who gets on TV or radio and says he never played with a gay guy is a stone-freakin’ idiot,” basketball legend Charles Barkley told the Washington Post. Barkley once informed a Scottsdale, Ariz., police officer that he had run a stop sign because he was hurrying to receive oral sex from his female passenger.

There are probably a few out-of-the-closet Major League Soccer (MLS) players, as in several regions of the country “soccer” is actually considered a form a gay courtship. Female athletes have felt comfortable being openly gay for decades.