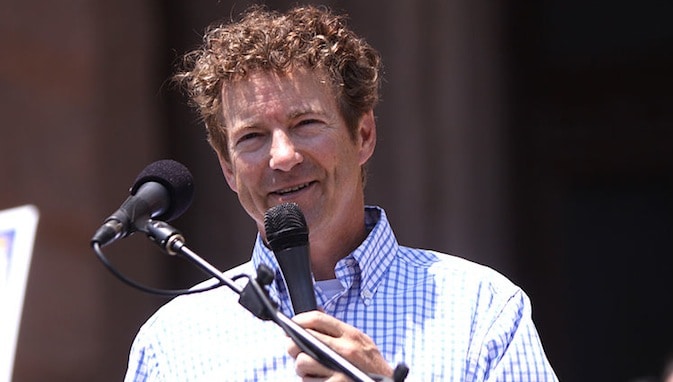 Rand Paul: “All Of My Black Friends Wish They Had Lived During Slavery Times Compared To Now Under Obama”

Sen. Rand Paul (R-KY) expressed disappointment that President Barack Obama had not yet ended racism. The Republican senator and former presidential candidate appeared Wednesday on the West Virginia talk radio program hosted by Tom Roten, where the two conservatives discussed the protests that broke out over the fatal police shootings of black men in North Carolina and Oklahoma, reported Right Wing Watch.

“You know Tom, I wasn’t pro-Obama, not even back in 2008 when he first became president, but a lot of people mistook that for hatred. I don’t hate the man, not at all; I just didn’t think this country was ready for a black president. And if recent events are any indicator at all, I was right,” Paul said. “And as a black president, if it was me, one of the first things I would have gone for on the very first day of my presidency would have been to tackle the enormous racial gap that exists in this country, and that many people are pretending is not real.”

The senator from Kentucky then turned to talking about “many” of his African American friends, who, as he put it, would “gladly trade” their lives in America today under the Obama presidency for those of their ancestors who lived during slavery. “You know, I have a lot of black friends back home, people I grew up with. And just the other day, we were sitting around during a barbecue, having us some Kool-Aid and reminiscing of our childhoods. And then one of them mentioned that he’s so dissatisfied with Obama as president that he’d trade his life today for that of his great-grandfather, who was a slave, by the way.”

“And you know, it was one of those statements that instantly turned all of our faces from laughter to horror and then to sadness, because we could all see how depressed he had become over the last eight years,” Paul said. “And he was usually the goofiest of the bunch, he was the clown, you know the type, always making jokes and making other people laugh. And you know, here we were, I could barely recognize the man, and he was just so worried and hurt with everything that’s been going on in the country recently. I felt horrible as a politician and as a friend.”

Paul added, “But what really blew my mind was that, after the initial shock, every single one of our black friends said he was right and that they’d join him in a heartbeat. Now, I know these guys – we grew up together – they didn’t say that to make the first guy feel better, they actually meant it. So, when you have a situation like that, a situation in which a president who’s supposed to fix things ends up making them even worse, you ask yourself if you would have done better, perhaps.”

“And let me tell you, Tom – I know I would. If not because of my black friends, then because of millions of white kids throughout the country who are going to attend future barbecues with their black friends years from now. I would most definitely not have ruined their future like Obama has,” he concluded.