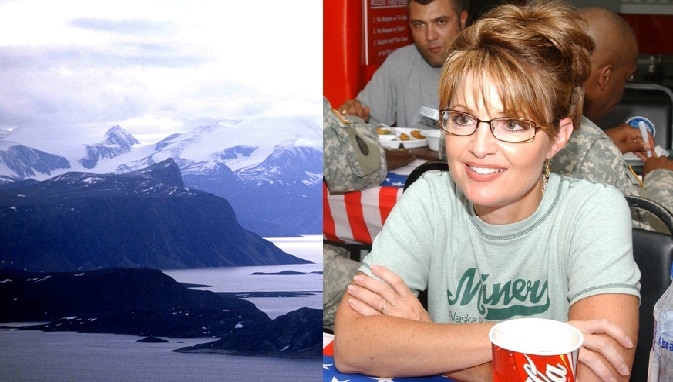 “Norwegian politicians have suggested refugees could be brought to a remote archipelago where polar bears outnumber human residents. Norway’s Green Party has suggested that Svalbard, a group of islands in the Arctic Ocean that fall under Norwegian sovereignty, may be able to take in some of the millions displaced by conflict in the Middle East and North Africa, according to The Independent.

“Espen Klungseth Rotevatn, leader of the Green Party’s Svalbard chapter, reportedly told Norwegian newspaper Vart Land on Friday that in addition to aiding people in need, the creation of a reception center for refugees would have a positive impact of creating jobs in the region, which recently learned of upcoming layoffs at a coal mining company that is one of its main employers.

Across the pond, a U.S. politician seems to have adopted the same idea and recently spoke of doing the same, only in Alaska. Sarah Palin, the former governor of Alaska, spoke to Newslo in an exclusive interview and revealed that “America has always taken great pride in its ability to help worldwide and that such a position should be continued, but also tailored to fit each situation.”

“We have a history of helping the world become a better place,” Palin said, “and I am deeply convinced that is one of the reasons why America is today the greatest country in the world. We take pride in accepting people from different cultures and walks of life, and most importantly, we don’t judge. That is why I feel it is once again our mission to help those poor people by offering them shelter, food and a new home.”

Asked to elaborate on her idea, the former Alaskan governor stated: “It is nothing groundbreaking and certainly not my brainchild; I heard that Norway plans to do something like this as well. But, basically, we have the majority of Alaska, complete with many of its Arctic islands, completely empty, so I put two and two together and thought that would be a smart and noble thing to do. Those people need a new home, and honestly, I need more voters.”

She added: “But, of course, that kind of treatment wouldn’t be free. I mean, Alaskans might be generous, but we’re not stupid. In order for the refugees to qualify to be taken and settled in Alaska, they would have to accept the Lord Jesus Christ as their savior. So, that would be the condition. All those who do so would immediately be taken to their new and beautiful home.”