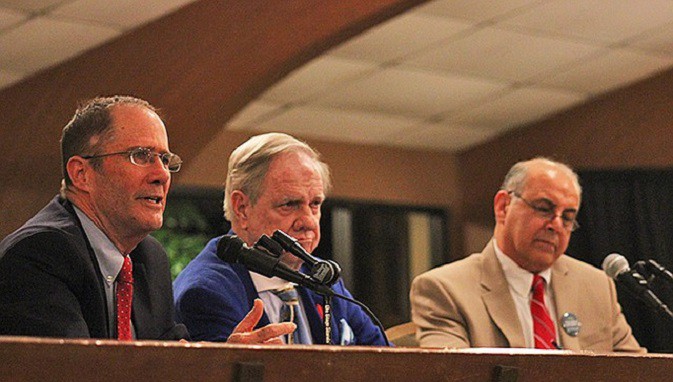 Rev. Book: “We Must Ban Pants For Women, They’ve Enabled Them To Spread Their Legs For Anyone”

Those celebrating the sweet land of liberty and thankful for soldiers who fought and died to protect American freedom are all wasting their time according to Rev. John Butler Book of Christian Viewpoint Ministry. The Equal Rights Amendment, which never passed the necessary states by the 1982 deadline, enslaved women, according to Butler Book. “They left the home, left their children, left their husbands, divorce rates skyrocketed,” he said. Women then continued the decline of society and “began to dress like men.”

“And that event, along with a number of other ones that also greatly contributed to the downfall of traditional American society, is why we today have a situation where it’s okay for a woman to divorce a man, and then take half of everything he owns without having had to lift a finger to earn it,” Book quipped. “I will go so far as to say that the so-called ‘strengthening of women’ and feminism have single-handedly provoked the demise of the once highly developed American society, which many have attempted to imitate, unsuccessfully, I might add.”

And as always, after stating their own twisted analysis of everything that’s wrong with American society, as well as the reasons that have caused such a state, Rev. Book, similarly to many other individuals who share his viewpoint, brought forth a theory that holds the solution to all of the country’s problems. “Although it sounds fairly simple, it’s going to be close to impossible to put into practice,” the Reverend argued. “What we need to do is make women go back to the traditional image of a mother who takes care of her family. And the first step towards doing that should be banning them from wearing pants.”

Book then went on to claim that the freedom to wear male-like wardrobe has somehow “messed with their minds” and “has tricked them into believing they should be equal, and in an increasing number of cases, even superior to men.” And that’s not how things should be, according to him. “Not to mention the physical side-effects like being able to spread your legs to anyone, thus inviting them to commit sin,” he added. “I dare you to try and do that while wearing a knee-deep skirt.”

“Whenever you see a woman wearing pants or any clothing item that has two separate trouser legs, you should immediately call the police,” Book advised. “Because, that woman is in grave danger. She could be mentally challenged, a nymphomaniac or even aggressively provocative on purpose. The truth is, she’s either trying to get herself in trouble or she’s unaware that she’s doing it. And in this case, the former is more dangerous than the latter.”

“At the end of the day, pants for women need to be banned, it’s as simple as that. For, as long as there’s just one woman strutting around in a pair of trousers in America, our society will have failed the very principle that made it great. And that principle is – treat your woman like a lady in public, an angel in the kitchen and the devil in the bedroom. And there’s nothing more gay than a she-devil in pants. A mini-skirt is the way to go. Just sayin’,” Rev. Book concluded.