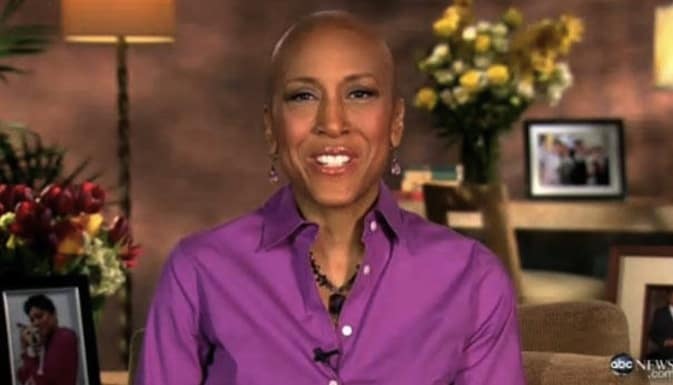 NEW YORK—America has fallen in love with Robin Roberts, the award-winning co-anchor of ABC’s “Good Morning America.” Even as she publicly faced serious health battles over the years, Roberts only this past Sunday dared speak the name of her love openly.

“At this moment I am at peace and filled with joy and gratitude,” she wrote on Facebook. Then, with great humility, she revealed what had been weighing on her heart for many years.

“The truth is I love all of you. Whoever you are—man or woman, black or white, young or old—I love and thank you from the bottom of my heart for allowing me to live so that I can go on inspiring others.”

In addition to recognizing her sister, who donated the bone marrow that saved her life, Roberts thanked her many fans for their prayers, saying, “I return every one of them to you 100 fold.”

“But Robin has done so much more than that,” said Laura Nusbaum, spokesperson for the National Marrow Donor Program. “Bravely announcing her myelodysplastic syndrome on GMA was a godsend, in that it dramatically increased awareness of this rare and understudied blood disorder,” explained Nusbaum.

“Thanks to her, the number of potential donors on the Be the Match registry shot up more than 1,800 percent the day she went public with her illness.”

Roberts is not looking for accolades. She just wants to continue spotlighting the hardships experienced by Americans so that the country can rally to their aid. Her courage and sympathy were both on display when she anchored a series of poignant reports from a Gulf still reeling from Hurricane Katrina in 2005.

“I’ve always been a fighter,” Roberts said on her morning program. “I was just born that way. It helped me beat breast cancer and it’ll continue to push me to make the world a better place until my heart gives out.”

In the past, Roberts has also credited her parents for cultivating the “three ‘D’s: Discipline, Determination, and ‘De Lord,’” exactly the qualities that the first family agrees she exemplifies.

President Obama’s trust and admiration for Roberts was made evident when he chose her to conduct the groundbreaking interview announcing his support for same-sex marriage in May 2012.

Michele Obama was even more vocal recently, tweeting her support to Roberts and her family, saying, “I am so happy for you and Amber! You continue to make us all proud. –mo.”