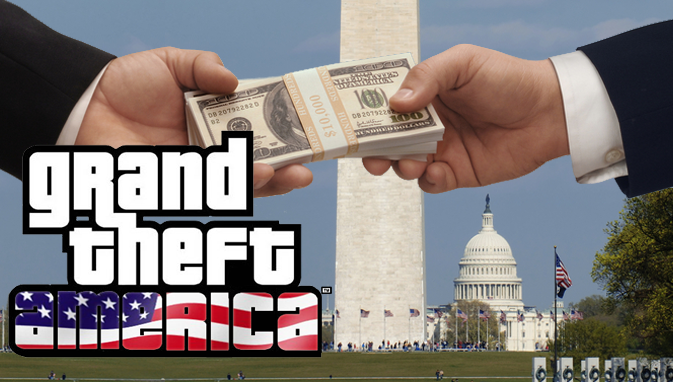 NEW YORK — Rockstar Games announced today the next installment in its popular “Grand Theft Auto” series: “Grand Theft America.” The game will put players in control of a Goldman Sachs employee as he rises through the institution’s ranks.

Whereas previous games in the series have centered on drug dealers, pimps, and other lowlifes, Rockstar is hoping to explore a new side of America. “We did a lot of focus testing,” explained a Rockstar employee, “and it turns out nobody cares about crack-dealers in the projects anymore. This game is all about the social problems people focus on today— in “Grand Theft America,” you spend time driving around getting poor people to sign variable-rate mortgage contracts, working late so you can get a six-figure bonus even though it’s a recession, and playing eighteen fully simulated rounds of golf with a senator.”

Fans of the “Grand Theft Auto” series will be surprised to learn that the new game does not include guns or shooting, instead focusing on what happens behind the scenes in the criminal world. Whereas earlier installments in the series had players committing heinous crimes and suffering the consequences if they get caught, the banker character will watch from afar as the damage unfolds.

The challenge, instead, will be to make as much money as possible without the public realizing what is going on. The game will include a fully simulated 54 trillion dollar derivatives market for players to toy with, and players have an unlimited number of ‘bailouts’ to reset Goldman’s holdings and try again.

Rival firms Morgan Stanley, CitiBank, and JP Morgan will be included in the game as the equivalent of other gangs in previous “Grand Theft Auto” iterations. In order to outcompete these other banks, players will engage in ‘creative destruction,’ ‘loss-leader,’ and ‘government intervention’ mini-games. Over the course of the story, the protagonist will be rewarded for his performance in these games as other firms and small businesses are forced to lay off more employees.

A spokesperson for Rockstar Games, when interviewed, reiterated that the team’s number one priority is realism. “This is a game about bankers, not gangsters,” the spokesperson said. “Anything that a banker at Goldman wouldn’t do with the permission of his boss and a bump of quality cocaine isn’t in the game. There are no guns or rocket launchers, and only occasionally do you beat up hookers.”