WASHINGTON — Even though the election is over and President Obama was re-elected on November 6, sources close to the former Massachusetts governor say Mitt Romney has continued to campaign across the country.

“Mitt has been running for this job for 6 years, basically,” the source said. “When the results came in on Election Night announcing that he’d lost, Mitt fell into a deep state of denial. He just decided that the results were wrong and that he could still change them.”

The source attributed Romney’s denial to the constant crowds, attention and adulation that had been a constant part of the candidate’s life for the past couple years.

“The day after the election, Romney lost his Secret Service protection, his security clearance, phone calls from influence peddlers, the whole lot,” said Romney advisor Matt Beauchamp. “He went home and checked his answering machine and he had zero messages.”

“He couldn’t handle it. When John McCain lost in 2008, at least he was still a senator,” says clinical psychiatrist and GOP consultant Dr. Jane Meadows. “He had a job to go back to, and he could still hang around with Washington power players. Romney has nothing to do except check his stock portfolio in the Cayman Islands.”

Dr. Meadows suggests Romney’s denial is a self-defense mechanism by his subconscious. “For his entire adult life, Mitt’s been able to tell people with less power than him what to do, whether it was firing someone or getting them to give him money so he could bankrupt their company. His mind truly can’t comprehend that ‘the little people’ defied him.”

That’s when Romney decided to go back on the campaign trail. He’s rented planes and crews to set up rallies around the country where the defeated candidate delivers stump speeches to whomever will listen.

“His rallies still attract some people,” says Beauchamp, “But they’re mostly morbidly curious to see a broken man talk to a mannequin he calls ‘Paul.’”

And there is one other difference to Romney’s strategy since losing the election. Romney avoids campaigning in the swing states. “If he never sees Ohio again, it’ll be too soon,” confided an intern.

Romney’s wife, Ann, says she supports her husband’s continued campaigning. “Sure I’m worried about his psychological well-being. But it’s much better than Mitt hanging around the house muttering ‘I could’a been a president.’” 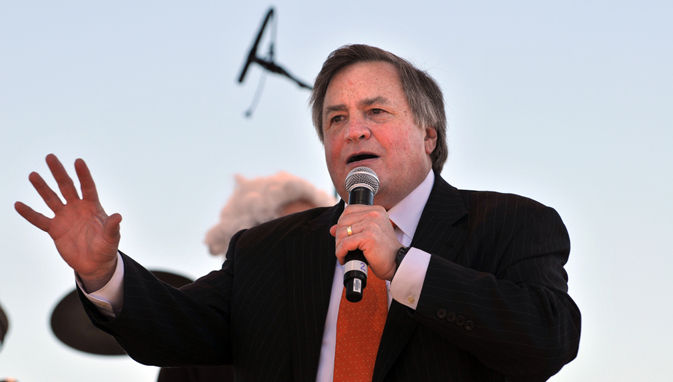