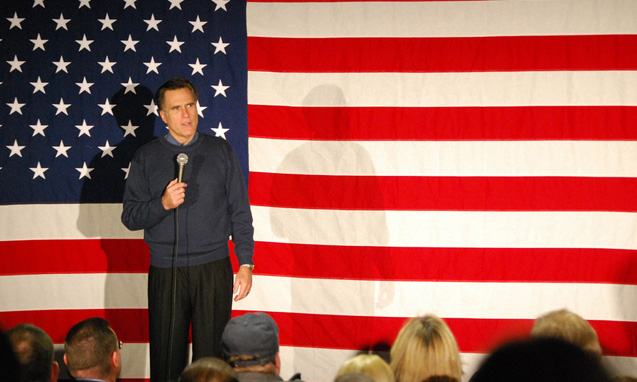 CLEVELAND — Responding to claims that he and running mate Paul Ryan have run a campaign based entirely on deceit and inconsistency, Mitt Romney has launched a series of television attack ads in swing states lambasting the president for exploiting his successes for political gain.

“Barack Obama keeps bringing up his accomplishments in office,” says a gravelly voice at the beginning of one popular ad that features flashing images of road kill and a soundtrack of ominous whispering. “He’s trying to trick you with readily apparent facts, like the fact that his dreaded Obamacare guarantees health care coverage to 32 million previously uninsured Americans and established measures to cut the growth of health care in the future.”

The ad then transitions to a clip of Mitt Romney walking meditatively through a garden to the harmonious melody of piccolos and chirping birds. As the Republican candidate stops to smell a wild flower, a smile softly spreading across his face, the voice over continues: “Mitt Romney would never help to establish a similar model of health care, except for that time when he did that in Massachusetts, but then changed his mind about ever having done that.”

Most of the ads follow a similar structure, allowing Romney to rail against the very achievements that Obama uses “shamelessly, and for political gain.” These range from the president’s successes with Wall Street reform to the 2009 stimulus plan, which saw the private sector producing more jobs than it was losing within a year of its implementation.

As for the auto industry bailouts that helped the Big Three automakers all gain market share for the first time since 1988, the ad says to thank Governor Romney, who “basically advocated the same course of action, even if you are holding a physical copy of the New York Times op-ed he wrote that is literally entitled ‘Let Detroit Go Bankrupt,’ which Mitt Romney never wrote.”

One ad questions the president’s moral character, charging Obama with the murder of Osama bin Laden, and then criticizing him for taking too much credit for the assassination of the “monster behind 9/11.”

“Obama thinks that, just because you may have benefited from his policies, you’d be dumb enough to vote for him as logic would dictate,” the ad continues. “Mitt Romney doesn’t think that even half of you are that dumb. Only most of the other half. But he understands why you might think that he thinks that, since you are so helpless and dumb.”

Focus groups were reportedly confused by some of the ads, particularly one that criticized Obama for producing 31 consecutive months of job growth. The ad ends by informing viewers that “sometimes Mitt Romney roots through your trash at night, looking for your wife’s socks. Then Mitt Romney decides he doesn’t find your wife attractive anymore and, in fact, never has.”

When pressed to clarify the message, Romney’s staff said that it would take too much time.