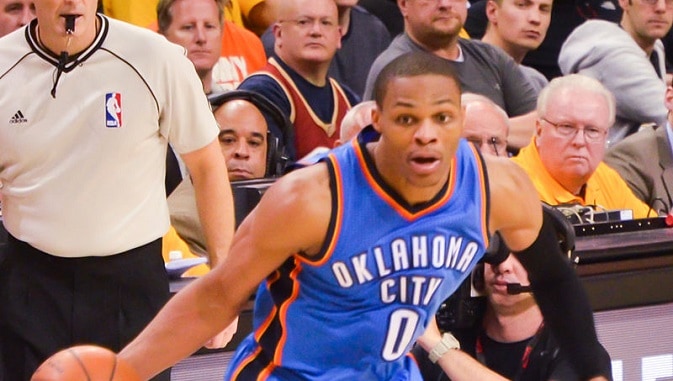 The NBA regular season is lurching towards its conclusion and one of the most hotly contested MVP races in years is coming down to the wire. Russell Westbrook, James Harden, Kawhi Leonard, and LeBron James appear to all be in contention for the award, with a recent media straw poll showing Harden with an edge. Reigning MVP Steph Curry cast his lot with Harden as well, and media members in Toronto asked Westbrook about it recently. Put simply, he doesn’t care.

“Why y’all bothering me with these sort of questions? You know I don’t roll like that,” Westbrook argued in his own style. “I can’t be bothered with that right now, you know what I’m sayin’? I got more important things to do, I can’t be thinking about this right now, you’re messin’ up my game, bruh.” Asked to elaborate on what could be more important than the prospect of being voted this season’s MVP, the player replied, “Well, you know, playing ball is nice and all that, but at the end of the day, a brother got to diversify if he wanna make it big, you know what I mean? So, I’ve been dealing with some other stuff as well, in addition to my, let’s call it, day job.”

Pressed to talk about the subject further, Westbrook revealed his plans of launching a social network of his own that would rival all the major players on the market like Facebook, Twitter, Pinterest, Instagram and so on. “But, um, it’ll be sort of like a VIP only thing, you know, like only extraordinary people are going to be able to join. We don’t want no average Joes, no Ogies from Muskogee and all that,” he said. “Because, we’ve already got way too much of that on these other networks. Like, we don’t want another Facebook or Snapchat, nothing like that. This will be a highly-scrutinized, anti-ordinary social media, just-for-super-extraordinary people, right, no everyday stuff.”

Asked what gave birth to such an idea all of a sudden, Westbrook said it was a “heat of the moment kind of thing.” “Yeah, ‘cuz for some reason, I stopped feeling comfortable on these other social networks, like, I wasn’t feelin’ it, you know what I’m sayin’? Like, it was getting too average for me, starting with the people and the topics of discussion to everything else, it was like I was starting to choke in my own vomit or something, man. So I figured, this is America, right? A brother can be entrepreneurial and s*it, right? So why not launch a social network of my own design only for the most special of people out there? It’ll be a riot, I can feel it.”

“And I already got the perfect name for it. You ready? It’s gon’ be called simply ‘WestBook.’ Is that not the absolute catchiest name you’ve ever heard for a social network? I can’t believe I didn’t think of this sooner, man. And the best part is, guys will have to pay only a small admission fee, whereas the ladies will able to get some WestBook completely free of charge, if you know what I’m sayin’,” the next potential MVP concluded.