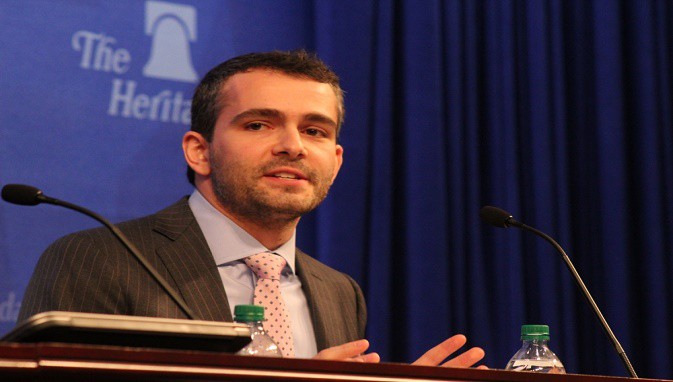 Ryan Anderson: “SCOTUS Ruling Means Gays Can Marry, Not That They’re Allowed To Have Sex”

“Washington, D.C. – Heritage Foundation senior fellow Ryan Anderson argued Tuesday that, while composing the 30-page majority opinion in last Friday’s U.S. Supreme Court 5-4 ruling that it’s unconstitutional for states to ban same-sex marriages, Justice Anthony Kennedy ignored the rights of children to have both a mother and a father.

“Anderson, who authored a not-yet-released book in response to the court’s decision titled Truth Overruled: The Future of Marriage and Religious Freedom, spoke on a Heritage Foundation panel and asserted that 78-year-old “swing-vote” Kennedy overlooked the very reason states are involved in marriage in the first place.

During his address, Anderson also looked back at the ruling and offered his personal interpretation of what it represents. “This is definitely a historical turning point in our great country, and I have no choice but to acknowledge that, regardless of the fact that I personally and utterly disagree with it,” Anderson opined. “However, I feel it is necessary to deal with the exact ramifications of the ruling itself, and what it will mean in the times ahead.”

He then went on to argue how the ruling will undoubtedly allow same-sex marriages “from a legal standpoint, at the very least,” but also told the panel attendees that “not all is lost” and that “the LGBT community still hasn’t won the war.”

“They might have triumphed in a single battle,” Anderson said, “but there’s still a long way to go for them to achieve all of their goals. The Supreme Court’s ruling might be a precedent according to existing legal and historical standards, but it still doesn’t enable them [LGBT people] to have sex and consume their matrimony. That’s still illegal, as far as they’re concerned, and will continue to be until the Supreme Court allows that too. There are many things that characterize legal precedents, but the one thing they lack is abundance. So, I say, good luck with that.”