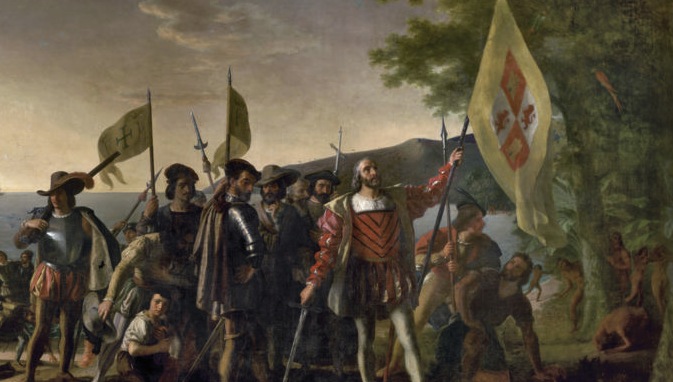 SIOUX FALLS, S.D. — A group of South Dakota Native Americans are using this Columbus Day to do some colonizing of their own.

Members of the Oglala Sioux Tribe of the Pine Ridge Reservation, a subtribe of the Great Sioux Nation, are celebrating Columbus Day by leaving the reservation to “discover and explore” the homes of strangers and declare them their own.

23 years ago, the South Dakota legislature unanimously passed legislation to change the state’s Columbus Day holiday to Native American Day, but many Oglala Sioux believe the change was made only to “assuage the white man’s guilt.”

“It’s nice to have a holiday and all, but I’d rather have my continent back,” said Ehawee, an Oglala Sioux high school student. “Besides, Thanksgiving is like a month away, and then it’s all about you guys again.”

Ehawee said that her family is one of hundreds of Oglala Sioux families who would use Monday’s Native American Day to go from home to home in Sioux Fall’s rich suburbs until they find one that they like. “Then the Oglala will make new homes. Maybe we’ll call our new land Canada,” said Ehawee’s father, Teetonka.

Teetonka admitted that taking over the homes of stranger’s could be dangerous, especially considering that South Dakota has the seventh-largest population of gun owners in the United States. “But who do you think owns half of those guns? That’s right. My people had to get with the times.”

Teetonka promised to use force “only if he doesn’t feel like negotiating” and said that he would “allow the home’s family to make new living arrangements in the back yard, or maybe in the basement, if they have one. That way they can still have a place to live.”

Bernie Shot With Arrow, a Tribal Council Representative from the Pine Ridge Reservation’s Medicine Root District, said he plans to “let it all go” when his family finds their new home. “Once we kick everybody out, I’m going to kick my shoes off, put my feet up on the couch, and live out my days like a white man.”

“We’re bringing our own blankets, though, just to be safe,” added Shot With Arrow.

Sioux Falls Chief of Police Doug Barthel said authorities are aware of “rumors about the Oglagla Sioux’s plan to invade homes,” but was adamant that locals need not feel threatened. “We’re under the impression that this is all just some sort of PR stunt, but just in case it’s not, the overwhelming number of good white people that live in the area should be enough to stamp out any threat of the native peoples.”

When asked if he was prepared to be arrested for trespassing and possible assault, Shot With Arrow answered firmly that he is “not afraid.”

“In fact, we’ll invite them in for a feast and see if things shake out differently this time.”