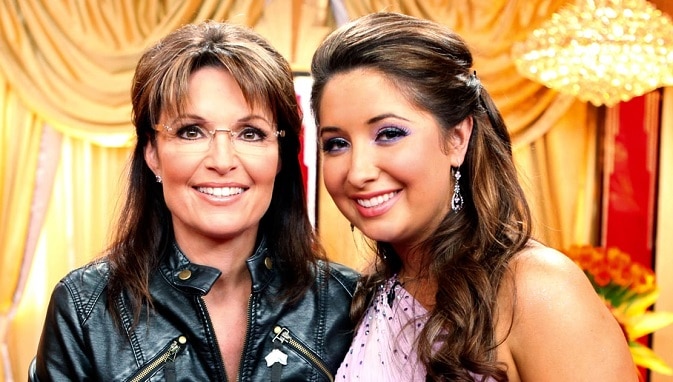 Sarah Palin has spoken out about her growing family, saying she “can’t wait” to welcome her granddaughter into the world, but adding that her “heart goes out to the single parents.” The former vice presidential contender and conservative firebrand broke her silence about her daughter Bristol’s second unwed pregnancy, telling CBS News recently that she’s happy about the baby news. “I can’t wait until about 45 days and I’m going to have a little baby granddaughter,” Palin gushed.

Bristol Palin, 25, announced her pregnancy one month after abruptly calling off her engagement to Marine Medal of Honor recipient Dakota Meyer in May. The couple had been engaged for roughly two months. Palin preached abstinence after giving birth to her first son, Tripp, while dating her high school sweetheart, Levi Johnston, in 2008. In a blog post in June, she called her second pregnancy “a huge disappointment to my family.”

Speaking to CBS News, the Palin matriarch expressed her excitement about the upcoming addition to the Palin family and even went so far as to compare her daughter Bristol to Mary, mother of Jesus. “If you’re asking me personally if I have a problem with Bristol’s second pregnancy, I mean, I know it’s not under the ideal circumstances, but you know, what is these days? It could have gone better, but it could have also gone a lot worse and I’m grateful that it didn’t, so at the end of the day, I’m just happy that she’s healthy and that everything is going fine.”

However, when asked if she was particularly upset that her daughter publicly professed abstinence and then, contrary to her own words, got pregnant out of wedlock for the second time, the former governor of Alaska got defensive and said: “Well, listen, if it were me, you know what I would have done. After all, I’ve got five children and I’m happy about each one. But, what happened, happened and probably could not have happened any other way. If you really want to get that technical, Mary, mother of Jesus also got pregnant without a husband and look how that turned out. I mean, that says a lot about the whole situation for all those single moms out there, doesn’t it?”

“And besides – you see what’s going on with these Syrian refugees. President Obama is clearly planning on importing all of them here and that’s all going to be performed legally. That means that we Christians are going to become a minority in our own country, so you better believe we need some way to fight all of them ‘off the books.’ And I believe a baby boom is the best way to do that, single moms or not,” Palin concluded.”