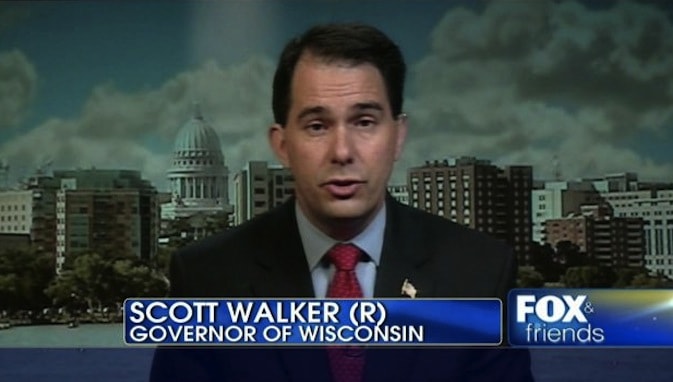 “Scott Walker, Gov. of Wisconsin, hasn’t made an official announcement that he’ll run for president yet, but he’s been traveling to early primary states and being awfully suggestive in his dialogue. Scott Walker (or any Republican) in the White House would be terrifying, especially for women who want to make informed choices about their bodies and healthcare. But under Walker’s watch, malpractice would be perfectly acceptable – and encouraged.

“Rep. Walker believes those life-changing facts are unnecessary, and he has a long history if introducing bills that encourage doctors to withhold such information in order to prevent them from getting an abortion.

“Walker first demonstrated his lack of ethics on this subject in 1997, when he and 34 other lawmakers introduced a bill called AB 538. The law at the time stated that if a doctor withheld information about a fatal disability while the pregnancy could still be terminated, then he/she could be responsible for the child’s future medical expenses. The purpose of AB 538 was to save doctors from that liability.

“The bill read: “This bill creates an immunity from a wrongful birth or wrongful life action for a person who commits an act or fails to commit an act and that act or omission results in the birth of a child because a woman did not undergo an abortion that she would have undergone had the person not committed the act or not failed to commit the act.”

“Fortunately, AB 538 didn’t pass, but Walker wasn’t discouraged in his plight to prevent abortions. Four years later, he and 28 lawmakers introduced the very same revision under bill AB 360. Fortunately, it was also shot down. In 1997, Walker also introduced a bill that banned partial birth abortions – and this bill was actually passed. In 1998, Walker introduced “conscience clause” legislation, which enabled doctors to deny their patients services (such as contraception) if they didn’t personally agree with it. The bill failed, but Walker was tenacious; he re-introduced it in 1999 and 2001, where it failed a second and third time.

“Fifteen years later, very little has changed. Walker still promises, “I’m pro-life. My position is consistent on that.” In 2013, Walker signed an ultrasound bill that ensures women seeking abortions can see the fetus inside them on an ultrasound. That bill also resulted in the closing of several abortion clinics. For someone who values dignity, Walker doesn’t seem to have much of it – lying to pregnant women about what’s going on inside their bodies is a sleazy pro-life tactic, in addition to being completely unethical.