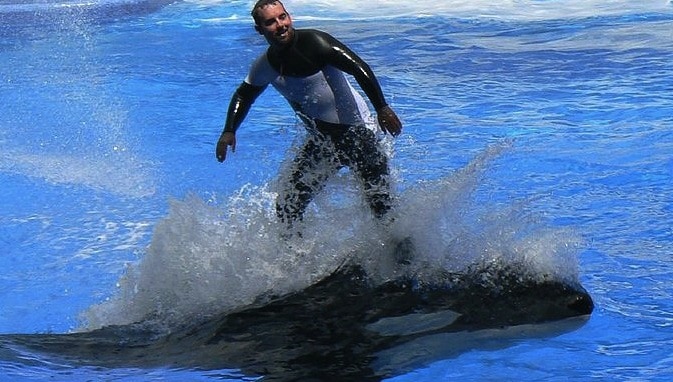 SAN DIEGO – This week, as a result of the constant pressure applied from Netflix users who streamed Blackfish, SeaWorld San Diego has announced, through their website, that they plan to double the size of their Orca environment. The new addition will be off limits to the public and will serve as a private area for whale trainers to apply certain “advanced encouragement techniques” to help the mammals “perform for crowds at a higher level than ever before.”

The addition, scheduled for completion in 2018, will cover up to 1.5 acres and hold an additional 5.4 billion gallons of water. It’s also set to include a 40-foot glass wall below the water line, where interested cetologists can study the effects of “sleep deprivation and deep cigar burns” on whales. Along with the new enclosure, SeaWorld has also donated $10 million to further orca research, specifically to see “if it’s possible to bring the whales onto dry land and stack them in giant naked whale pyramids”.

Members of Netflix Users for Ethical Animal Treatment, who have been leading the charge against SeaWorld, have said that they will not lay down their pickets until the Orcas are treated ethically, with NUFEAT’s main animal attorney, Jabson “Howling-Monkey” Eastward, saying:

“This is really just a drop in the bucket for a company that’s trying to turn back the hands of time. Well, only Cher can do that. The fact is, torture is never ethical unless it’s used to gain information that could save millions of human lives. Now if someone were to set a nuclear bomb somewhere, and the whale was the only one to know the disarming code, well then maybe we’d see things a bit differently.”

Though SeaWorld has defended its soon-to-be “advanced encouragement technique” zone—or, as opponent’s have dubbed it, “orca Guantanamo”—saying that its first goal is to “maximize the health and well-being” of the orcas, the company has admitted that some of the ways in which they encourage the whales could be misconstrued by uneducated spectators.

“Whales, by their very nature—and studies have shown this—are masochists.” explained Jim Atchison, CEO and president of SeaWorld Entertainment Inc. “Our trainers read de Sade and Sacher-Maosch to them at night, and they love it. They just love it. Jumping out of the water, splashing around. They couldn’t be happier when we attach their fins to car batteries. And when the whales are happy, they perform better. Now, if these NUFEAT people could only put their own feelings and prejudices against the masochist community to the side, then everyone would be happy. We could keep pleasing the whales, and the whales will keep happily entertaining us at a high level. I really don’t see what the problem is.”