WASHINGTON — Senate Minority Leader Mitch McConnell (R-Ky) has warned his supporters that if they are not careful, black men will soon be taking their guns and possibly their wives.

Sen. McConnell, who is also expected to ask Congress to change his official title to something less offensive to his constituents, told his supporters in an e-mail that their guns are in danger.

“You and I are literally surrounded,” Sen. McConnell said, apparently trying to use the word “literally” in a figurative sense. “The gun-grabbers in the Senate are about to launch an all-out-assault on the Second Amendment. On your rights. On your freedom.”

McConnell, who uses sentence fragments because he feels they are more efficient, stressed in his e-mail that all guns are under attack.

“They’re coming for your guns,” he said in the widely reported e-mail.

“And who is behind taking your guns?” McConnell continued in an extra portion of the e-mail leaked to NewsMakeup.com. “That’s right, Barack Obama. Our first black president. He has black friends. Do you want a bunch of black guys taking your guns? I don’t think you do. You know what happens if they take your guns, right? Then they will take your wives and daughters, and even your sports teams. They will make us their slaves! It would be just like Planet of the Apes.”

“Look, if you have lots of guns, you probably have a small penis. We know that. It’s OK to admit it. Hey, at least we have big guns. They may fire too fast sometimes and get jammed, but we know how to use them. My wife doesn’t care and nobody is going to mess with me because I have a big gun,” the Senator explained. “What we don’t need now is a bunch of black men coming around and taking our penises. I mean guns.”

McConnell is also concerned that Pres. Obama taking guns away from “true Americans” is an assault on safety in the country’s towns and cities.

“We need our guns in case we have guys in hoodies walking around our neighborhoods,” he said. “True Americans with true American values should be able to live in their homes with their guns and their wives and their Viagra. God clearly wants all people to be able to kill each other with guns, and an attack on our guns is tantamount to the Jews attacking Jesus Christ.” 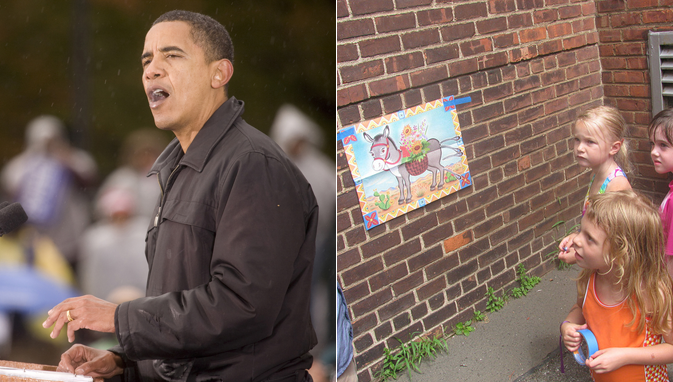 White House: Obama “Kill List” Assembled via Pin the Tail on the Donkey