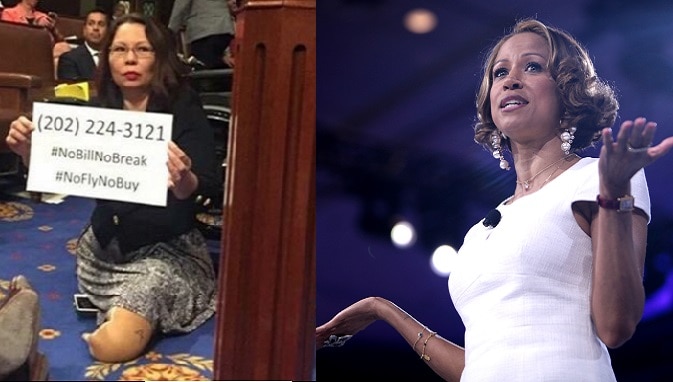 Stacey Dash: “It’s Uncivilized To Sit On The Senate Floor, Especially With No Legs”

Fox News contributor Stacey Dash blasted House Democrats for conducting what she said was an “uncivilized” protest in an effort to get a vote on gun safety bills. On Thursday’s edition of Outnumbered, Dash agreed with House Speaker Paul Ryan (R-WI), who called the Democrats’ protest a “fundraising stunt.” However, one congresswoman, Rep. Tammy Duckworth of Illinois, is being called a “badass” on social media for her participation in the protest. She is an Iraq War veteran who was wounded in combat and had to have both legs amputated. A photo made its way around Twitter showing Duckworth sitting on the House floor, out of her wheelchair and with her prosthetics removed.

In what could only be interpreted as a blatant display of discrimination against people with disabilities, the actress told her co-hosts that “having politicians protest against something they don’t agree with in this manner, especially in 2016, is a sure sign that the American society has reached a new low.” “What is this, communist Russia? Do we know no other way of displaying our disagreement than sitting on the floor of such an important political institution? I mean, all we need now are a couple of clowns and a dancing bear and we could call this whole thing a downright circus,” she said.

Dash then went on to argue, “And what’s the deal with that disabled girl? I understand she’s a war veteran or something. That’s cool and all, but honestly I feel she shouldn’t be using the fact that her legs were amputated in order to draw attention to herself, and more importantly, her party’s cause.” She also opined that “we can lie to ourselves all we want, but the fact to the matter is, having no legs is a great way to earn some sympathy points quite easily,” as well as that “and while I do genuinely feel bad about her condition, I still think she’s playing dirty.”

However, the culmination of her flammable and offensive rhetoric came when she said that what bothered her “most of all” was the fact that the Democrats “chose to play right into Duckworth’s strong suit by using sitting on the floor as a way of protesting.” “I’m sure somewhere along the line, one of them had the bright idea and went, ‘Oh, I’ve got it – let’s all sit on the floor and do this passive-aggressive crap, and also let’s remove our disabled friend’s prosthetic legs and get her out of the wheelchair and sit her down with us. That ought to be something for the media.’ And they were obviously right, because now everybody’s talking about her. I bet 9 out of 10 people don’t even know what the so-called protest is about,” she said.

“I kinda think you’re taking it a bit too far now Stacey,” her co-hosts attempted to thwart a potential lawsuit, apparently. But, the actress was relentless: “No, this is something we need to talk about, we need to get the truth out there. Like, I feel like the fact that they would stoop so low is a desecration of the House, it’s so uncivilized. I’m all for giving the opposing party the chance to fight for what they believe in, but this is just a cheap shot. I mean, I’m thinking we ought to have Donald Trump bring some strippers to the House the next time he speaks there, just to get even and get some more points for himself. I’m generally not a fan of Donald Trump, but after this, I’d let him go through with it just for the hell of it.”