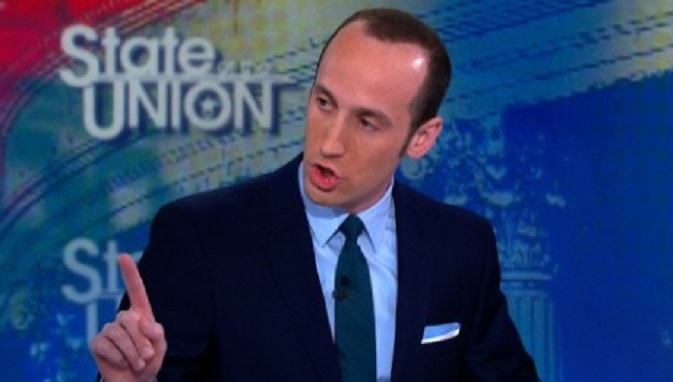 President Donald Trump on Sunday declared that his top adviser, Stephen Miller, had done a “great job” representing him on Sunday shows even though the interviews were widely panned. In interviews on CBS, NBC, ABC and Fox, Miller repeated the same talking points about the president’s travel ban, asserting that judiciary was not the “supreme” branch of government for deciding on the constitutionality of laws. The aide also defended Kellyanne Conway’s promotion of Ivanka Trump’s clothing line and said that White House Press Secretary Sean Spicer’s statements were always “100 percent correct.” Viewers took to Twitter to blast Miller’s appearance as scripted and robotic. Many accused him of reading his answers off of a teleprompter.

Asked to reflect on what many are calling the “most robotized interviews in the history of interviews in America,” Miller told Internet portal KnowMyRepulican.com that that “couldn’t be farther from the truth,” but also that “even if it were true, it would still be better and a lot less sneaky than what the CNN is doing.” Miller further elaborated on his rhetoric, saying that, when compared neck-to-neck, answering predetermined interview questions “doesn’t even come close” to spreading fake news about the President of the United States by quoting his Tweets. “At least when we’re talking about scripted interviews, the reason why they’re scripted is to avoid using wrong facts and misstatements,” he said. “And by the way – if you want to talk about using the wrong facts to make headlines, you really ought to talk to CNN – they’re specialized in that branch of journalism.”

Asked to elaborate on his accusations, Miller then argued that “politics aren’t an exact science that always deals with facts,” which is why taking what a person Tweets and claiming that that’s their actual position on a range of topics is “just ludicrous.” “If I or anybody else were to Tweet something like, ‘Tomorrow we’re going to go to war with North Korea,’ or better yet, Russia – who in their right mind would assume that’s something I want to happen? Just because a person is using social networks to say something or convey a message doesn’t mean they’re actually wholeheartedly behind it. And that’s exactly what the CNN would have Americans believe: that every single Tweet President Donald Trump makes is a direct reflection of his personal position on whatever,” he said.

“If that were the case,” Miller continued, “I would be prone to believing he actually thought I did a good job on those Sunday interviews, which I know for a fact is not true, because we spoke on the phone afterwards and, let me tell you – he gave me a piece of his actual mind and it wasn’t pretty.” The aide also went on to say that, just like with any other social network or public media platform, Twitter can and is being used by people to promote messages other than their personal positions and opinions. “Frankly, even I agree that POTUS does say a lot of nonsense on there, which doesn’t mean he actually means it. And to clarify – he’s not intentionally lying to people; he’s just someone who has a short fuse and is, simultaneously, very good with words. He lets go of the brakes sometimes and things happen that weren’t planned.”

Miller argued, “But, what the CNN does is very sneaky – they know all of this and they’re just waiting for President Trump to say something flammable or harsh, so they could use it, spread it around like it’s the truth – like he really means it, even though it gets said in the heat of the moment – and that’s how fake news are born and that’s why CNN’s personal grudge against Donald Trump – which is not something they’re supposed to have, since they claim to be objective journalists – is behind 95 percent of the bad news you read about the president.”

“They’re just waiting for an opportunity where he tweets something, then they take him extremely seriously, even though he doesn’t take himself seriously half the time when he’s using Twitter. As a result, you hear about Donald Trump having said this and that, when in reality, all he’s doing is just venting,” he added. “He’s using Twitter to simply blow off some steam, and that’s being taken advantage of. Plus, it’s not like he’s doing something nobody else is. Give the guy a break, we all use social media sometimes to just say things out loud that we don’t really mean.”

“The difference is, we’re not Donald Trump and the CNN doesn’t hate us like they hate him. But, that’s not to say the NSA doesn’t have tons of dirt on every single one of us. The difference is – we’re not stepping on anybody’s toes. And the reason why it has all that dirt is because of former President Obama and his green light to the NSA to tap into our privacy. But, that’s a story for another time. At the end of the day, all I know is I wouldn’t want to be holding a job at CNN in the next couple of months,” he concluded.