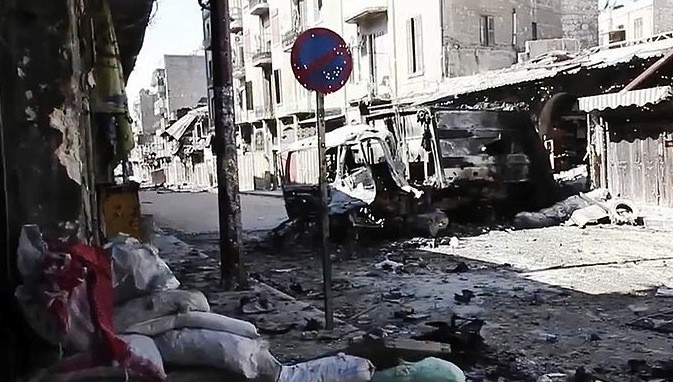 ALEPPO, Syria — A high-ranking Syrian official has admitted that President Bashar al-Assad’s ongoing aerial assault on the city of Aleppo is “mostly about winning back attention” from a fickle international community.

Syrian warplanes have killed more than 300 people, including 87 children, in just over two weeks of sustained air strikes in northern Syria. Much of the destruction has come from crude “barrel bombs”—oil drums filled with explosives and dropped into civilian districts.

Opposition forces say Assad’s regime is trying to regain ground from rebels ahead of peace talks expected to begin in Geneva on Jan. 22, but Syrian Minister of National Reconciliation Ali Haidar told a Russian state news agency that the true goal of the attacks is to regain flagging attention from international media.

“Pulverizing buildings and driving out opposition forces is all well and good, but if nobody is paying attention except for us and the people we’re dropping bombs on, then what’s the point?” wondered Haidar.

Although the bombings have drawn condemnation from Human Rights Watch, the United Nations, and even the White House, Haidar said that Assad’s regime will not rest until it has “dropped enough bombs to win back the admiration of Western media outlets like CNN and Fox.”

“It wasn’t that long ago that the world’s spotlight shined on Syria,” recalled Haidar. “If we’re not careful, we’ll end up like Egypt, which might as well not even exist anymore.”

“The attacks over the weekend killed more than 300 people, many of them children. The Syrian government must respect its obligations under international humanitarian law to not kill children until they become adults,” stated Carney.

Haidar said that what might seem like a casual White House condemnation could escalate into an international crisis in no time, but noted that without a “red line” gimmick, Syria could remain in the shadows.

“We have to give President Obama most of the credit for this past summer’s media blitz. True, we’re the ones who used the chemical weapons, but we’re not ashamed to admit the whole thing was really about Obama’s indecisiveness.”