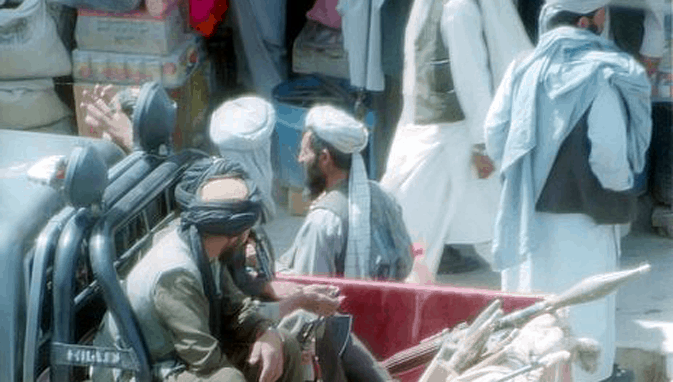 KARACHI, Pakistan – Ten Pakistani Taliban militants attacked the Jinnah International Airport in Karachi late Sunday night in what appeared to be a violent protest against baggage fees, cancelled flights, and other grievances the terrorist organization has with modern airline travel. Abdullah Bahar, commander of the Pakistani Taliban, admitted that his group was behind the attacks–which left 28 people dead–and said that Pakistan and the world could “expect more of the same until airlines start treating people with decency.”

“This is a war,” Bahar said Monday, shortly after the gun battle between militants and police finally ended. “A war on smug airlines who think they can treat people like crap and get away with it.”

Bahar said that “infuriating delays” were one of the group’s chief motives for attacking the airport. Five Taliban “missions” have been ruined because of delayed flights over the past month alone, according to Bahar. “How can we bring the jihad to the infidel West if we’re spending fifteen hours stuck in Lahore on layover?” he asked. “It’s just not right.”

Bahar–who has led the Pakistani branch of the Taliban since November, when its previous leader was killed in an airstrike—also expressed his personal displeasure with the movies airlines frequently show in-flight. “Personally, I’d rather not poison my mind and soul with the godless excrement that Hollywood belches out,” Bahar said. “But if I have to, can we at least get some quality pictures? Matthew McConnaughey is doing some really interesting work lately, and yet I’m stuck watching Grown Ups 2.”

Pakistani officials believe that the group was trying to destroy several planes and much of the busy airport’s infrastructure, which could have had a significant impact on the country’s aviation industry. “I hate the Taliban more than anything, and what they’ve done here is despicable,” said Sindh province Gov. Ishrat Ul Ebad Khan. “But you have to admit, they do kind of have a point. Flying these days is just dreadful.”

Although all ten attackers were killed during the fighting, several workers remain trapped inside the airport. Bahar said that he “knows how awful it is to feel trapped in one of those prisons,” but maintained that the attack was necessary because of the “endless list of annoying things that airlines won’t stop doing.”

“And what is it with those seats? Bahar said. “You can’t recline them far enough, your knees bang the seat in front of you, and the fabric smells like baby farts. Violence is the only response to that kind of injustice.”

The Taliban are also promising that similar attacks will continue until something is done to address their complaints. “As long as we are breathing, our attacks will be continuing ’til the end of our lives,” Bahar vowed. “Or at least until I’m allowed to check more than one bag for free.”