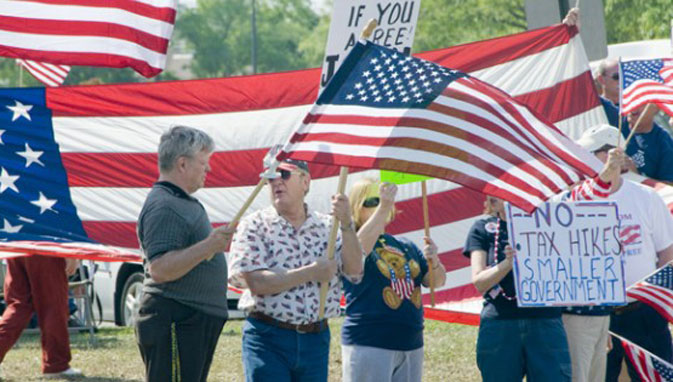 NEW YORK — Amidst a boycott of Fox News, members of the so-called Tea Party movement have unwittingly discovered the deep and life-fulfilling pleasure of reading the world’s great literature. For three days, Tea Party activists turned away from the network in order to send a message to its CEO Roger Ailes, warning him that there would be consequences for what they perceive as a shift to the liberal side of the political spectrum. However, what began as an obstinate effort to grab the right-leaning network’s attention has become an introduction to some of the world’s best works of fiction.

“Aside from a cop drama here and there, the only thing I watch is Fox News,” said Kevin Avard, a former New Hampshire state lawmaker who took part in the boycott. “Eventually you find something to do with that considerable amount of free time, and I have to say, Pale Fire by [Vladimir] Nabokov? Get out of here, that book was brilliant in the way he used non-linear narration.”

Tea Party members have criticized Ailes’ post-election comments regarding the network’s need to modernize its views, particularly with regard to immigration reform. Overall, Tea Party members appear to be frustrated with Fox News’ treatment of the Obama administration.

“I felt betrayed, just sincerely betrayed,” said Tea Party Patriots co-founder Jenny Beth Martin, regarding Fox News’ reporting of the 2012 attack on the embassy in Benghazi. “But then I realized, that’s nothing. I mean, when you get to that moment in Razor’s Edgewhere Isabel leaves Sophie, an alcoholic, alone in that room with that bottle of Zubrowka … I just broke down. Somerset Maugham, sir, you collapsed my heart with your story of beautiful, doomed characters, and I love you for it.”

The Benghazithe incident has in fact been mentioned on air an average of 21 times a day over the last three months, according to a report from TV Eyes—belying the Tea Party’s suggestion that the network has ignored it. Moreover, Tea Party groups are upset that Fox News is devoting less and less time to President Barack Obama’s birth certificate. Kathy Amidon, one of the leaders of the boycott, says those who share her ideology will not back down from this battle, their lives enriched by classic texts in the meantime.

“Online, the Tea Party message boards are as active as ever. You hear a lot about not missing shows as much as you thought you would,” said Amidon. “It’s also wonderful because I’ve never taken the time to explore F. Scott Fitzgerald’s work beyond Great Gatsbybut a patriot from Omaha told me I needed to read This Side of Paradise

“Obama was born in Kenya, and my heart conceived a newfound respect for authors of the Jazz Age thanks to this boycott.”