“Senator Ted Cruz of Texas, the Republican presidential candidate who believes that the gay “jihad” may soon lead to the imprisonment of pastors and the end of free speech, told a right-wing radio host on Wednesday that the legalization of same-sex marriage represents the greatest threat to religious liberty in the history of the United States.

““We are seeing today profound threats to religious liberty in America, I think the greatest threats we’ve ever seen,” Cruz told conservative author and talk radio host Eric Metaxas. Cruz also said that the fights over “religious freedom” laws in Arkansas and Indiana were “heartbreaking” examples of how the Democratic Party has “gotten so extreme and so radical in its devotion to mandatory gay marriage that they’ve decided there’s no room for the religious liberty protected under the First Amendment.”

“He added that while “Democrats joined with big business in vilifying an effort to protect our religious liberty,” too many Republican leaders and presidential candidates “ran and hid in the hills.” Cruz said: “We’re a nation that was founded by men and women who were fleeing religious oppression and coming to seek out a land where everyone of us could worship God Almighty with all of our hearts, minds and souls, and that is under profound jeopardy today.”

“The worst part is, this is just the beginning,” Cruz commented on the topic exclusively for Newslo. “Honest-to-God, normal, traditional Christians are on the verge of being extinct. I am proud to say that I am a member of the dying race, and I refuse to stand by and let the deviance and fornication prevail. What we need, what America and its people need, is decisive action and God’s righteous fury.”

He added: “If I win the presidency, one of the first things I plan to do is see to it that all the scientists who claim homosexuality is innate are out of a job. This has gone beyond a mere social problem – it’s a full scale epidemic and like all epidemics, what must be treated is the cause, not the consequence. If we change our perception of gays and same-sex marriage, we can finally begin the slow and painful road to recovery.” 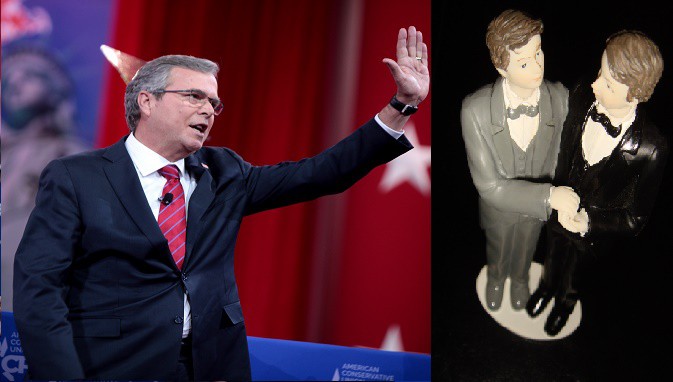 Jeb Bush: “Gays Can Ban Christians From Their Weddings If It’s Against Their Beliefs”