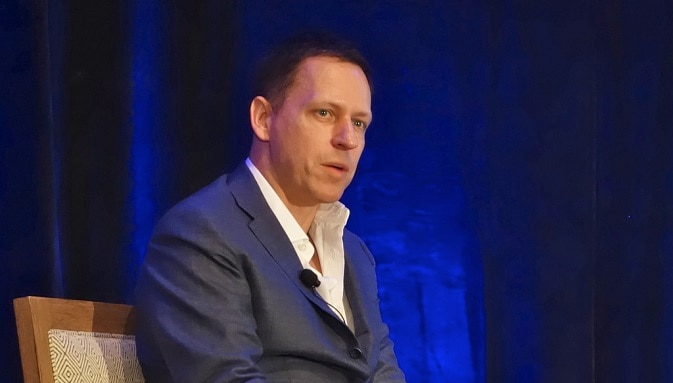 Thiel: “The Presidential Election Was Rigged From The Moment Women Were Allowed To Vote Against Their Husbands’ Wishes”

A tech billionaire who’s publicly said that giving women the vote was bad for the democracy is giving $1.25 million to Donald Trump, who would likely win the U.S. election if women didn’t have the right to vote. Over the weekend, the New York Times reported that Paypal and Palantir co-founder and early Facebook investor Peter Thiel was giving Trump the big donation, confirming his support of the candidate just as his campaign faces a meltdown over sexual assault allegations.

“I am and I have no reason to hide it, any of it,” Thiel replied when asked to comment on the donation to the Republican presidential candidate by Internet portal WhosYourMillionaire.com. “The man deserves it and then some, but unfortunately, I have a lot on my plate at the moment, so this is all I could spare. I do feel bad about it, but hopefully there will be more donations in the future, when Donald Trump is president. But until then, this was all I could muster on such short notice.”

Asked to elaborate further on the donation in question, the billionaire said “it’s about time” someone stood in the way of feminism and “the downfall of traditional American values it has caused.” “I’m a goal oriented guy, alright? Everybody knows that, that’s why I get paid the big bucks. But, I can’t help but feel disgusted by the country we’re living in today, especially when I compare it to the country I once lived in. It’s just not the same United States of America, you know? Things are different, and I don’t mean that in a good way. So, as any goal-oriented guy, I decided to do something about it. And this is how it starts,” he argued.

The tech billionaire then opined that women in general are “unable to be rational,” as well as that “they don’t see the dangers of a female presidential candidate for the country as a whole.” “By definition, I think women lack the rationality that inherently adorns all men,” he said. “That’s why the second women were allowed to vote against the wishes of their husbands, the entire presidential election became rigged. And coincidentally, that’s also why today there’s a liberal female as the Democratic presidential candidate. It’s like we’re living in some parallel universe where everything is upside-down from what it should be,” he said.

“The second women got their independence, the entire world was shot to hell. And seeing how we’re one of the most progressive and forward-thinking nations in the world, we started the revolution and now it’s come back to bite us in the a*s. That’s exactly why Donald Trump needs to get behind the helm and start steering this boat in the right direction. Otherwise, we’ll be overrun by feminist equality-seekers whose next move is probably going to be mass corporate emasculation. They are going to have male employees’ reproductive organs dangling from their office walls like trophies. And I for one would like to keep mine between my legs for a little while longer,” Thiel concluded.