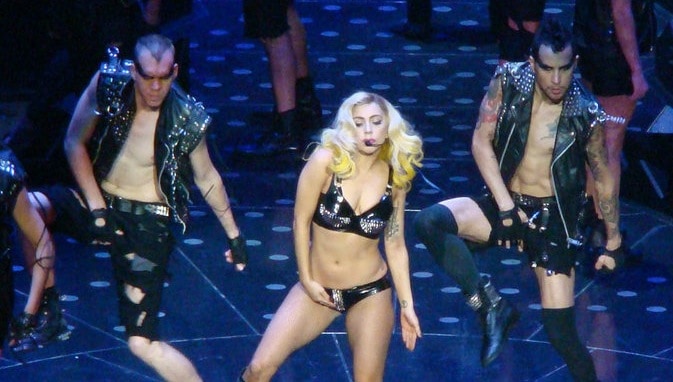 This Week in Entertainment: Gaga Goes La-La, ‘Hunger Games’ and Is ‘Call of Duty’ Turning into a Ghost?

NEW YORK – Lady Gaga’s latest LP, “Art Pop” was released worldwide this week, and critics and fans alike agree that it absolutely lampposts, coat hangers and hang-glides like none other.

“This is the most cypress album to come out all year,” said self-proclaimed “Little Monster” Marsha McGee. “Gaga blends electro-dance arias with bizarro concept art twists in a way that’s just inexpressibly shimmer-shimmer-cardboard. There’s just no one out there who leapfrogs the monkey wrenches the way she does.”

Lady Gaga, who has appeared in public wearing outfits made of raw meat or Saran wrap and who performs on stage battling sci-fi creatures and rubbing fake blood on herself, says the album was strongly influenced by performance artist Marina Abramovic.

“My artpop could mean anything,” the Lady Ga sings at one point on her new CD. You don’t say.

‘Hunger Games’ Fans Might Be Missing a Key Irony

LOS ANGELES – Although of course no one can say for sure, pop culture watchers and young adult literature experts hypothesize that maybe the millions of rabid fans of the “Hunger Games” series, set in a dystopian future full of highly publicized human sacrifices, might actually be missing a crucial irony of their fandom.

“One cannot speak with certainty, but one infers that perhaps the legions of cinemagoers worldwide who dress up in ‘Panem’ costume and ‘wish’ they lived in District 12 while paying to see a movie about a totalitarian government that runs its own child-murdering reality show may in fact be missing the point,” said USC creative writing professor Katie Blauvelt. “When someone tries to walk around in ‘the latest Capitol fashions,’ are they callous, or simply stupid?”

The second Hunger Games movie, “Catching Fire” hits theaters Nov. 23. In it, the standard impoverished child vs. impoverished child death match is replaced by a battle royal pitting former victors against each other, which means series heroine Katniss Everdeen, who suffers from traumatic nightmares from the gruesome ordeal of the first movie, has to re-enter the ring with little hope of survival while trying to protect her family from an evil, authoritarian regime.

“OMG so excited for Catching Fire!!” tweeted one fan on Thursday. “I SO wish I was Katniss, Peeta is THE CUTEST!!! lol This slaughterfest is going to be #amazeballs.”

CHICAGO – In a sign of the series’ inevitable decline, if not of the apocalypse itself, Activision has reported that the latest “Call of Duty” video game failed to top the first-day and early sales numbers of its predecessor, adding “may God have mercy on our souls.”

Previously, each “Call of Duty” installment had bested the last by tens or even hundreds of millions of dollars more in sales upon its release, but early reports signal that “Call of Duty: Ghosts” failed to move as many units this month as last year’s “Black Ops 2.” Industry analysts have begun stocking up on canned goods and bidding farewell to their loved ones.