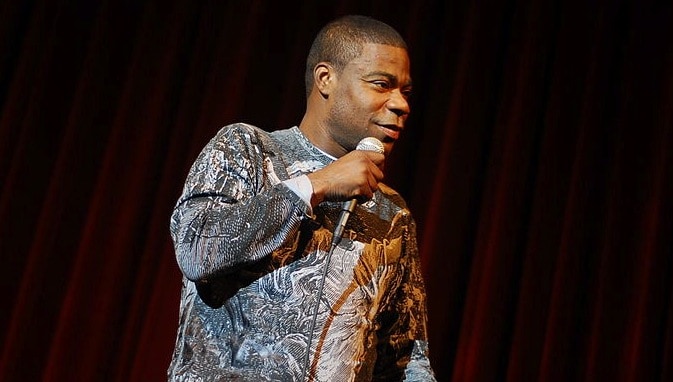 LOS ANGELES – Comedian and “30 Rock” star Tracy Morgan was released from the hospital earlier this week after a fatal car crash left him severely injured and claimed the life of his mentor James McNair. Morgan wasted no time seeking restitution for his injuries, filing a lawsuit against “Cop Out”director Kevin Smith for his role in threatening Morgan’s career.

“After nearly losing my life in this tragedy, I’ve come to understand just how precious my time on Earth truly is,” said Morgan in a written statement. “To spend so much of my life stuck on the set of a film that was doomed to fail from the start feels criminal, and I intend to make Kevin Smith pay for his role in putting my career in such serious jeopardy.”

Morgan’s announcement came immediately after news that he would be suing Wal-Mart for their role in his most recent accident, which was caused by a sleep-deprived Wal-Mart truck driver who lost control of his vehicle. In his court filings, Morgan claimed that Wal-Mart should have known the driver hadn’t slept in over 24 hours and had been on the road well beyond federal safety limits for truck drivers.

On the Internet, Morgan’s fans have been outspoken in their support. According to the status of one Facebook user, “I love Tracy, and I’m glad he’s OK, but I’ll never recover from the 2 hours I spent watching that miscarriage of a film. I should have known it’d be terrible the minute I saw Seann William Scott’s name in the credits, but man, that was just unforgivable.”

“Cop Out”was a 2010 film directed by Kevin Smith, who rose to prominence on the strength of earlier works such as “Clerks”and “Dogma.” However, “Cop Out,” which starred Morgan and Bruce Willis as NYPD officers chasing down a stolen baseball card, was viewed as a disaster. The film was universally panned by critics, earning a meager $55 million at the box office. Some analysts say the film’s lackluster performance put a drag on Morgan’s film career, right as his star-making turn on NBC’s “30 Rock” should have brought him a new level of success.

For his part, Smith has done his best to distance himself from the film as well. In his memoirs published in 2012 (the title of which is unfit for print), Smith described his experiences on set as “soul crushing,” and wrote extensively about his struggles working with actor Bruce Willis.

After being served with the lawsuit, Smith gathered reporters outside his home to issue a statement. Smith, an outspoken marijuana enthusiast, then squandered the occasion by rambling on for 45 minutes about his plans to film a follow-up to his critically reviled 2007 film “Jersey Girl.”