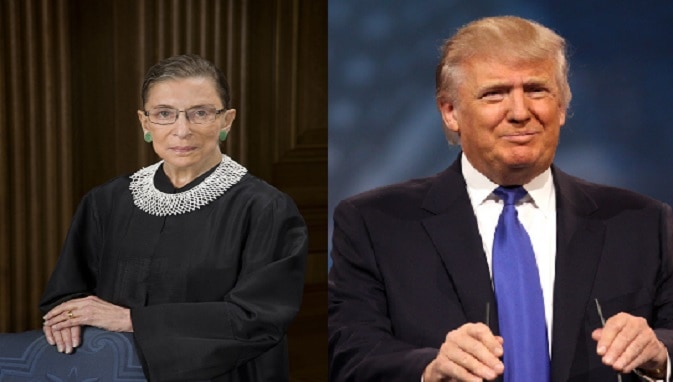 In a 5-3 ruling on Monday, the United States Supreme Court struck down a pair of Texas abortion restrictions that would have shut down dozens of clinics across the state. While Justice Ruth Bader Ginsburg joined Justice Steven Breyer in his majority opinion, she penned her own scathing concurring opinion that, in one brief paragraph, warns lawmakers across the country that medically unnecessary abortion restrictions will never be tolerated by the high court.

Commenting on the decision, Republican presidential hopeful Donald Trump told The New York Times that the ruling was “shameful” and that “it represents a reason why a new Justice needs to be appointed to the Supreme Court as soon as humanly possible.” “Otherwise, we’re looking at a lot of problems in the future. And let me tell you, the situation is not going to get any better, especially considering the track record these guys have,” he said.

The real estate mogul went on to accuse Justice Ginsberg that she “voted the way she did not because she really means what she said, but because she is a feminist and an extreme liberal who hates Republicans from the bottom of her soul.” “Anybody can see it, you just need to connect the dots,” he added. “Because it was Texas, and the South is traditionally Republican, she’s afraid that all those babies that would have been born had the state’s ban been approved by SCOTUS, would have grown up to become Republicans. And as a Democrat, that’s her worst nightmare. So, she did the only thing she could to prevent that.”

The billionaire businessman also said that “it has become blatantly obvious” that his persecution is being orchestrated by his political opponents and people who don’t want to see America rise up from the ashes. “Just take a look at what’s going on. First I had a Mexican judge who didn’t have the guts to go after me personally, and instead decided to go after innocent students at Trump College, who, by the way, have nothing to do with my political views. And then, just now, we have this Jewish Supreme Court Justice who wants to get rid of Republican babies because they would be bad for her position. If that’s not an example of an elitist committing murder in order to protect her power, I don’t know what is,” he argued.

“And you know what upsets me the most?” Trump asked. “The fact that she has conveniently managed to wrap it all up to look like she voted the way she did in order to protect women and their right to choose. Not to mention that I’m baffled by how it’s possible that so many Americans are incapable of seeing through her ugly, Jewish mask. Babies are a wonderful thing and we need more and more of them, especially Republican ones. Democratic babies are okay, they’re not as desirable, but they’re okay, because, you know, a day is not a day without the night to let it shine as bright. So, as long as they’re from American parents and born on American soil, we’ll take ‘em.”

“Oh, right,” Trump added. “I almost forgot: it’d be really cool if they were Christian, you know, so we wouldn’t have this same problem when it’s time to appoint new justices to the Supreme Court again. Because, if we’d paid attention to that some, what, 150 years ago – that’s about how old Justice Ginsberg is, right? A decade or two up or down, close enough – if we’d paid attention to that back then, we wouldn’t be in this mess right now. Just sayin’.”