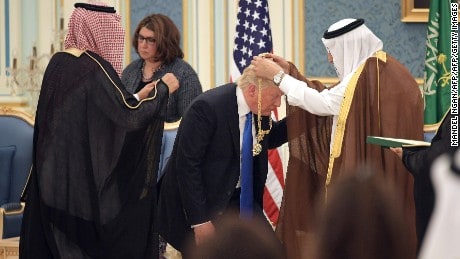 Trump: “Unlike Obama, I Only Bowed Down Because The Golden Necklace Was Super Heavy”

President Donald Trump’s first trip overseas has – so far – gone seamlessly if one disregards the chaos he left at home with multiple bombshells dropped by the Washington Post and the New York Times regarding White House doings. However, as the world awaits Trump’s speech on Islam, he was the recipient of a great deal of mockery on Twitter for a half-curtsy he bestowed upon the king of Saudi Arabia. Quipsters with long memories recalled conservative outrage that was showered upon former President Barack Obama when he bowed to foreign leaders – including the Saudi King – during what conservatives still call his “apology tours.”

However, during an exclusive interview via Skype with conservative portal KnowMyRepublican.com, the president argued that his actions during the tour – namely bowing down to the Saudi king – have “absolutely nothing to do” with what Barack Obama did when he first assumed the presidency. According to Trump, a “miscalculation in official protocol” was the only reason why he bowed down during the ceremony. “It happens, you know, what can I say,” he said. “These things tend to happen every now and then, I’m not mad. This is a foreign country, these people have never met me – I assume that must be an honor for them – so I get it, they were nervous and mistakes happen. Everything’s fine as far as I’m concerned.”

“However,” the president continued, “I won’t allow what happened to turn into another reason to make jokes about the way I represent America overseas. To go after me is one thing; that’s fine because I’m the president and I expected that. But, to mock the way I represent our country, that’s just insulting and if I have anything to say about it – and I do – I’m going to do everything I can to make that illegal. Now, about what happened, the thing is, that golden necklace thing was super heavy, which is why I sort of lost my balance for a moment when I first felt the weight of it around my neck. I mean, I’m a fit guy, I keep in shape, but that darn thing was pure gold. It almost tipped me over, but I managed to regain my balance. Let me tell you – it’s a good thing I had a couple of Big Macs for breakfast or else Saudi Arabia could have been charged with attempted murder of the U.S. President,” he said.

“On the other hand, what Barack Obama was doing when he was on the tour is completely different. He went around bowing down to everyone, whoever they were and that wasn’t good. What I’m doing is, I’m showing respect and representing the democratic values our country is based on. I’m not worried at all, though; if you can’t stand up straight from a half-bow with several pounds of Saudi gold dangling from your neck, it just means you haven’t been squatting enough in the presidential gym. It was terrific. I felt like they finally admitted that I really have made America great again, that’s what it meant to me. There was a lot of gold there. I doubt they give that much gold to anyone else, including Barack Obama. As a matter of fact, the one they gave him was probably only gold plated,” Trump concluded.