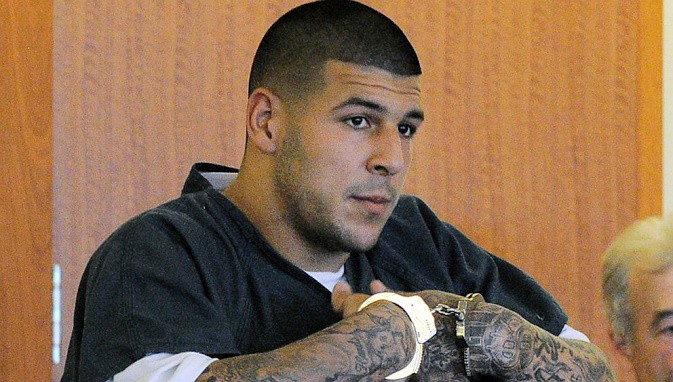 “Fall River, Massachusetts – Former New England Patriots star Aaron Hernandez looked on impassively Wednesday as he was sentenced to life without the possibility of parole. This is a new low for a young man who once enjoyed a $40 million pro-football contract and now stands convicted in the 2013 murder of onetime friend Odin Lloyd.

“At trial, the defense team described Lloyd, a former semi-pro football player, as Hernandez’s “bluntmaster” – his purveyor of marijuana – and his future brother-in-law. But in victim impact statements, Lloyd’s relatives portrayed him as a loving son and protective brother, as a man who rode his bike 10 miles to work and wore the same flip-flops for 12 years.

“Ursula Ward, Odin’s mother, told the court, without looking at Hernandez: “Odin was my only son. He was the man of the house. He was also his sister’s keeper. After my daughter Olivia had her daughter, Odin became her keeper, too. I thank God every second for every day I spent with my son. The day I laid my son Odin to rest, I think my heart stopped beating for a moment. I felt like I wanted to go in that hole with my son Odin.”

“But she found forgiveness in her heart: “I forgive the hands of the people that had a hand in my son’s murder, either before or after. And I pray and hope that someday, everyone up there will forgive them also.” Outside court, Bristol County District Attorney Thomas Quinn said of her ability to forgive: “I think it’s a tremendous compliment to her. As difficult as it is for people in the end, forgiveness is what it’s about, if people can bring themselves to that point,” he said.

However, in a rather unexpected turn of events, it would seem that Hernandez will have a chance to continue doing what he does best – play football. Newslo has learned that two U.S. high security state prisons are interested in offering a professional contract to Hernandez, in exchange for good behavior.

Although it has not yet been specified which facilities have decided to make this bold move, it is certain that they’ve already decided to draft Hernandez because of his “violent history,” which, Newslo learned exclusively, is “an asset” in the newly-formed National Penitentiary Football League, or NPFL.