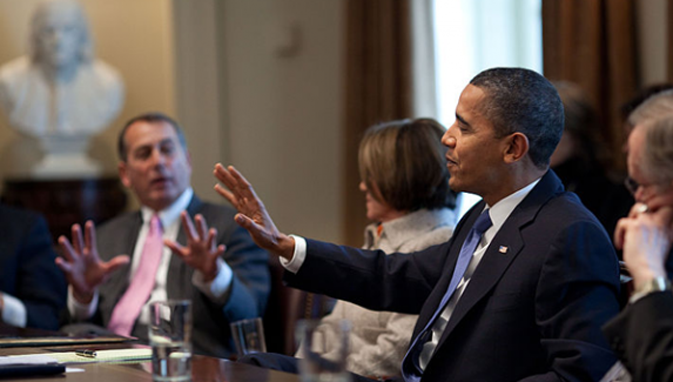 WASHINGTON — In a recent press conference held to address budgetary concerns arising out of the reported construction of a cavernous two-story military building in Afghanistan, John F. Sopko, the Special Inspector General for Afghanistan Reconstruction, fielded a litany of questions about the cost and purpose of the structure.

Reports indicate that the $34 million building was built to serve as the U.S. Military Headquarters in Afghanistan. But according to these same reports, the U.S. military has decided to forgo use of the structure, thus leaving it empty.  Sopko quickly dispelled those notions.

“The information you’ve received about the building is completely erroneous,” Sopko explained. “The photos, the cost – all of it.  We planted that information in the media to keep the secret alive.” Sopko then produced a 12” X 18” photo print from behind the lectern to reveal a football stadium mock-up.  “This is what we really built,” Sopko proudly remarked. “You love it.  Don’t you? Come on, don’t lie.  Just embrace it.”

When asked about the feasibility of an NFL team in war-torn Afghanistan, Sopko responded with a Power Point presentation laying out a positive economic forecast for the plan (the earliest call for a profit is 2093). “People love the NFL. So much so that I think we’d be dumb not to push an NFL franchise here,” Sopko continued. “I can’t freaking wait until these fans see this state-of-the-art beast up close. Giant scoreboards. Hookah clubs. A retractable roof for when it’s not 120 degrees outside;  Goddamn I wanna strap on a helmet and run through a wall right now,” said Sopko. “Whoo!”

Sopko was less confident when answering a question about the cost of the project. “Oh boy. Yeah, about that.  How do I – okay, don’t kill the messenger here,” said Sopko. “Seriously, I need you to go easy on me here, guys. The funding was a tad more than the reported $34 million. In fact — it was kind of over a billion dollars and I’m late for a league softball game so I really have to go now bye,” Sopko said as he quickly scooted from the lectern and disappeared.

While Sopko and the U.S. Government have consistently hidden details about America’s project-funding efforts in Afghanistan, the facts have at least painted a vivid picture. Over a two-year span America lost between $30 and $60 billion worth of contingency contracts to waste or fraud in Afghanistan and Iraq and, more recently, bought $551 million worth of Russian helicopters that were never used by the intended beneficiary, the Afghanistan military. Whether America’s funding of the NFL franchise proves to be a wise investment – unlike many of its previous decisions in Afghanistan — remains to be seen. At the very least, Jerryworld has met its match.