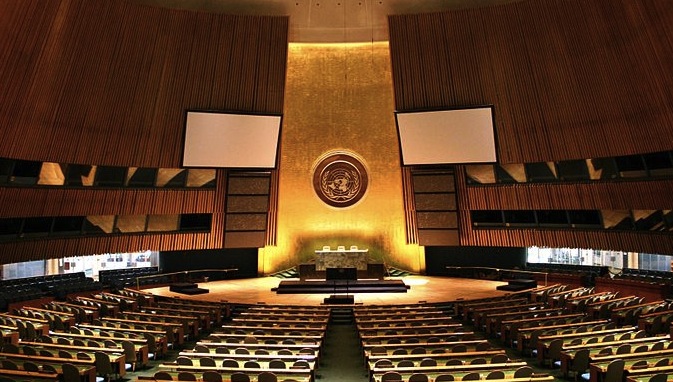 United Nations Arms Trade Treaty Supported by Everyone Except Syria, Iran, North Korea and The NRA

NEW YORK – Earlier this week, the United Nations voted overwhelmingly to approve a historic treaty that would provide additional regulations to the international arms trade market, tying a nation’s human rights record to its ability to buy weapons. The Arms Trade Treaty received almost unanimous support, with votes against it coming only from Iran, Syria, North Korea and the NRA.

“Yes, the NRA has a voice at the UN,” said Wayne LaPierre patiently, as though speaking to an unarmed child. “We essentially control the U.S. legislature, and the U.S. essentially controls the United Nations, so yes, it’s fair to say that it’s absurd we aren’t on the Security Council yet.”

The Arms Trade Treaty places new controls over the multi-billion dollar market for tanks, combat aircraft, warships, missiles and launchers, small arms and light weapons. It establishes a system to curb the trade of arms to regimes with records of violating humanitarian law – what the NRA is calling a “background check on entire nations”.

The implementation of the treaty’s provisions is still several years away, and, since it is the UN, there are effectively no enforcement measures for it. Nonetheless, the United States’ National Rifle Association, along with several rogue states, as well as China and Russia—who diplomatically abstained from voting in the General Assembly—is set to fight the treaty with everything it has.

The National Rifle Association has vowed to block the Arms Trade Treaty from being ratified by the US Senate, where it would need 67 votes to be approved. Senator John Cornyn of Texas, a high-ranking Republican, said the treaty contained “unnecessarily harsh treatments” of domestic gun rights and the “individual right to self-defense from the UN.”

The US Government has strongly rejected the NRA’s claims that the treaty targets domestic gun ownership rights, saying the treaty very clearly states that it will only guide the international arms trade.

Secretary of State John Kerry lauded the treaty, saying it could help situations like the one in Syria, which has access to nearly unlimited weaponry sold by Russia. The treaty, Kerry said, will “reduce the risk” that arms sales will be used to promote “terrorism, genocide, crimes against humanity and war crimes.”

Wayne LaPierre responded by saying, “According to my reading of the Universal Declaration of Human Rights, every regime is guaranteed the right to arm itself.” He also reminded the nation that the United States is the world’s biggest arms exporter.

While the Arms Trade Treaty is unlikely to be ratified by the US Senate, it only needs approval from 50 nations to be officially enacted by the UN, leaving it up to the NRA to quickly obtain and exercise some form of veto power.

4 Key Things To Consider Before Taking On A Franchise