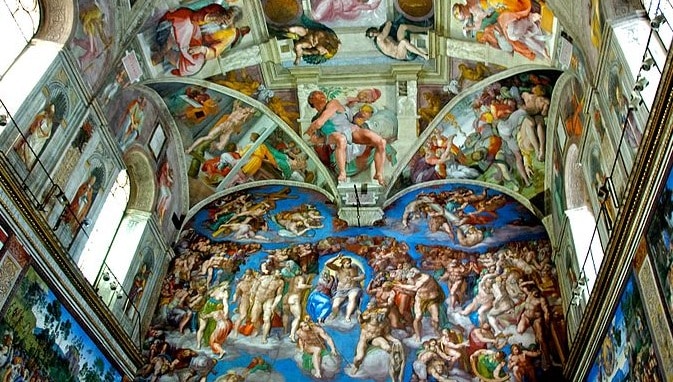 Vatican Paints over Sistine Chapel Ceiling, Calling It ‘Too Lavish’

VATICAN CITY — “The Creation of Adam,” like Michelangelo’s other famed frescoes adorning the ceiling of the Sistine Chapel, has become the latest victim of the fall of man. In this case, the man in question is a German bishop whose prodigal spending led Pope Francis to order a fresh coat of temperance throughout the church.

Embarrassed by the $41 million renovation of Bishop Tebartz-van Elst’s private residence and surrounding buildings, Pope Francis—who has made a point of living in an austere guesthouse, rather than the palatial apartments of his predecessors—last week summoned the bishop to the Vatican. There, the pope scolded Tebartz-van Elst for sullying Francis’s designs to restore the church to its more modest roots and ordered him to paint over the “lavish ceiling” of the Sistine Chapel with his dentispeniculus, Latin for toothbrush, as an act of shared penance.

According to one member of the Curia who was in attendance, the pope told Tebartz-van Elst that, “while the bishop was serving under the Holy Father’s purview, he would play by his rules and live a more humble life.”

Kristian Kappel, a Vatican historian based in Germany, commended the pope’s chosen punishment, calling it “an unprecedented way of showing that the church is serious about restoring humility and modesty from inside out.”

“Besides,” continued Kappel, “for a bishop who spent $20,000 for a bathtub and was planning on suspending a cross from the ceiling of his personal chapel here in Limburg, the penalty is as close to ‘an eye for an eye’ as one could imagine.”

According to a statement released by the Vatican, other changes are in the works to emphasize the church’s common touch and concern for the needy. Besides nixing plans to offer ‘sparkling holy water,’ the U.S. Conference of Catholic Bishops has been authorized to work with the Internal Revenue Service to relinquish the Catholic Church’s tax-exempt status.

Asked about the loss of priceless works of art that were recently restored at the cost of millions of dollars, a Vatican spokesperson pointed reporters to the gift shop where there are “many postcards and reprints for sale.”