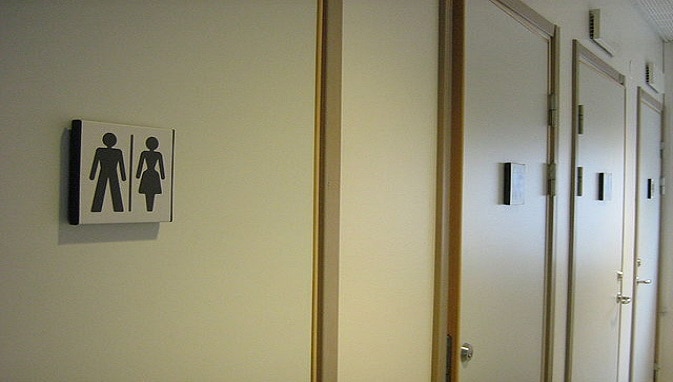 Republican attacks on transgendered Americans and the religious fight to keep gender a binary delineation took a turn for the bizarre recently when Virginia Republican Mark Cole filed a bill that would force schools to check the genitals of their students in order to ensure that they are using facilities reserved for their “anatomical sex.” “Local school boards shall develop and implement policies that require every school restroom, locker room, or shower room that is designated for use by a specific gender to solely be used by individuals whose anatomical sex matches such gender designation,” part of the bill reads.

Commenting on his brainchild, Cole stated that “there is no other way to achieve total and utter gender separation, other than having an employee of the school physically present who would personally check each student’s genitals prior to allowing them to use the school facilities.” Adding that “we are not back in the Middle Ages” and that “technology is there to serve us and not the other way around,” the Virginia Republican also argued that “we better nip some of these problems in the bud.”

“I can’t really imagine how kids would feel if they were forced to display their private parts to an officer of the school every time they needed to take a pee,” he said. “I mean, can you imagine what that would be like? On one hand, you’d have thousands of kids doing that several times every day, and on the other hand, schools would actually have to hire people to look at students’ genitals. When I think about that as a job, I immediately start getting flashes of old perverts sexually harassing school students and all kinds of sick fantasies coming to life. This is not the Middle Ages, people, we have technology today that can do that for us.”

However, Cole also admitted that his system would not be without human input, at least at its inception: “X-ray scanners, on the other hand, would do the job perfectly. I mean, sure, at first we’d have to have someone monitoring the scans to make sure that everything is working without a hitch, but we’d soon upgrade the system into being completely human-free. In fact, instead of imposing the $50 fine for anyone who tries to go into the wrong bathroom, we could also put dog zapping collars on students, and have the system automatically give them a little tiny electric shock if they were to attempt to enter the wrong bathroom. We’d sort those so-called transgender kids out in no time, trust me.”

And when a reporter asked about the fact that X-ray scanners are obsolete and can cause radiation poisoning, Cole waved his head and replied, “Oh come on, those kids use their cell phones 24/7, they’re already poisoned. And besides, it’s not like they’re not smoking or doing drugs. A little radiation never hurt anyone, those kids are tough, have no fear.”