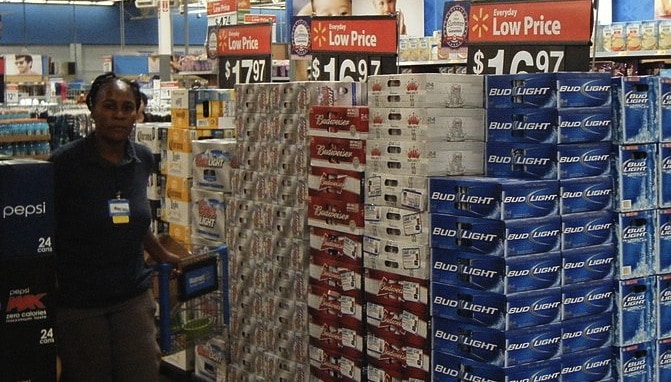 BENTONVILLE, Ark. – Amid news that Walmart, along with several other large retailers, have been selling shrimp farmed with slave labor, workers at Walmart’s 11,000 stores are expressing dismay and wondering how they themselves can begin working as Walmart slaves, which most would consider a “generous promotion.”

“About six hours into my shift, I often find myself fantasizing about being an actual slave,” said Mary Kane of Utica, Conn. “They might not get paid, but at least they get housed and fed without having to worry about how they’ll pay for it all on $7.50 an hour.”

“And slave owners aren’t likely to fire you just for stopping a robbery or using medical marijuana, because slaves are expensive investment,” whereas Walmart’s annual turnover rate is over 50%, Kane said.

A report by the Guardian this week revealed that Walmart sells shrimp in its stores farmed by the Thailand-based company CP Foods, the world’s largest shrimp producer. The report showed that the latter company uses fishmeal that is produced by slave labor, and it also charges that “laborers work 20-hour days for no pay, and are tortured, beaten, and sometimes murdered.”

“Physical violence is horrific, and I feel terrible for the workers enslaved to make Walmart’s shrimp,” said Terri Bower of New York. “But let’s be honest—can it be that much worse than the psychological and spiritual torture we experience everyday as ‘free’ Walmart employees? You try spending your day explaining to irate fifteen-year-olds that we’re all sold out of the new ‘Call of Duty,’ and see if you wouldn’t rather get beaten with a blunt object.”

One of the most common complaints expressed by Walmart’s workers is the stress and discomfort they experience by spending eight or more hours a day inside a Walmart. “The lighting is nauseating, the people are depressing, and it smells like a mixture of burnt popcorn and mildewed laundry,” said Steven Grady of Huntsville, Tenn. “I’d be willing to put up with beatings and degradation if it meant I could breathe the sweet ocean air all day instead.”

Walmart employs about 2.2 million people, many of whom are already planning the long trip to Thailand to see if they can get themselves picked up by slave traders and “sold into a better life at sea.”

“It’s probably a pipe dream,” said Ken Jenkins of Toledo. But Jenkins acknowledged that as many as 500,000 people are believed to be enslaved in Thailand, which “really helps [his] odds of being captured.”

The Guardian report also suggested that many of the slaves who help produce Walmart’s shrimp are given meth to keep them awake during long shifts. “That’s not so different from actually working at my Walmart,” explained Billy Haggerton of Charleston, West Virginia. “Except here it gets deducted from our pay.”